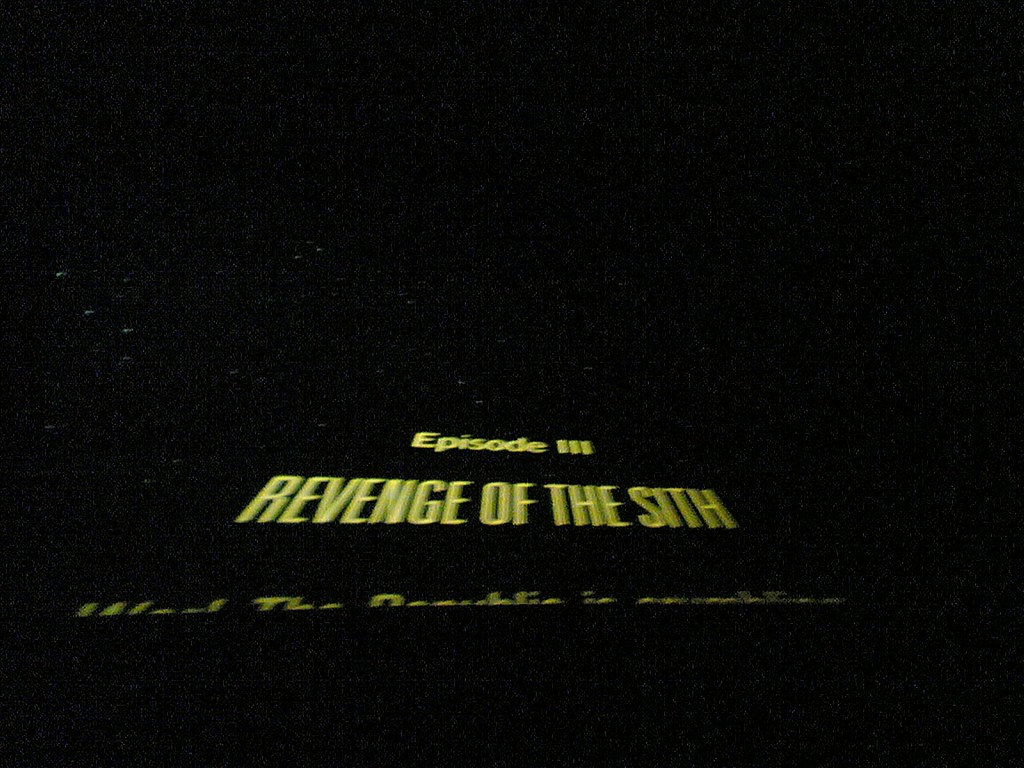 Star Wars: Episode III – Revenge of the Sith is the sixth film in the Star Wars franchise and the third installment of the prequel series.  It was written and directed by George Lucas.  It was distributed by 20th Century Fox in 2005.  The movie earned over eight hundred and sixty million dollars worldwide.  It was the second highest grossing picture during its release year.  Harry Potter and the Goblet of Fire was the first.  The plot continues the saga three years after the events of Attack of the Clones.

Count Dooku and the Confederacy of Independent Systems are at war with the Galactic Republic.  Supreme Chancellor Sheev Palpatine is captured by the Separatist Droid Army leader General Grievous.  Big G is a cyborg with several arms and an eponymous name.  A space battle erupts.  A star wars of sorts.  Obi-Wan Kenobi and Anakin Skywalker lead the mission to rescue the Chancellor.  The Jedi fight through the enemy.  Damage occurs.  Damage is mitigated.  The good guys crash land as the emergency breach doors close.

Skywalker and Kenobi fight through the ship.  R2-D2 plays support.  The Jedi find Palpatine and are confronted by Count Dooku.  Lightsabers extend.  The heroes work together.  The Sith Lord uses the Force to subdue Obi-Wan.  Anakin gets angry and dips into the dark side.  His output increases as he severs the Count’s hands.  Dooku is impressed, but unable to applaud.  Palpatine encourages Anakin to finish what he started.  Skywalker hesitates and then decapitates and grabs Obi-Wan’s unconscious body.  Everyone leaves.  Kenobi wakes up.

Grievous traps the Jedi.  R2-D2 provides a distraction.  The Jedi grab their weapons and break free.  Two Magna Guard droids attack.  Skywalker and Kenobi finish them off.  The General flees in an escape pod and launches the others.  The Jedi manage to land on Coruscant in an emergency firespeeder.  Time passes.  Anakin is lauded for his achievements and meets with Amidala in secret.  She says she is pregnant.

Grievous meets with big dog Nute Gunray and the other Separatist Council members.   Darth Sidious gives them instructions to move to the planet Mustafar.  The General is hesitant after Dooku’s death.  Sidious assuages him by saying he has another younger and more powerful apprentice.  Anakin has a nightmare.  Palpatine summons him and they chat.  He appoints Skywalker as his personal representative on the council.  The Jedi High Council refuse to grant Anakin the rank of Master and assign him to watch the Chancellor.  Yoda is tasked with reinforcing the Wookiees.  Obi-Wan tells his protégé that he is to spy on Palpatine.  Anakin is torn.  Kenobi is too.

Palpatine takes Skywalker to the Opera and seduces him to the dark side.  He tells him about Grievous’s location.  View points of the Sith and the Jedi are debated.  The tragedy of Darth Plagueis the Wise is discussed.  Anakin asks if it is possible to learn the power to stop death.  The Supreme Chancellor says not from a Jedi.  The Opera ends.  Anakin tells Yoda about Grievous and Obi-Wan is sent to hunt him.  Kenobi departs and tells an upset Skywalker that his proud of him.

Obi-wan begins his search for the General.  He finds him.  Grievous wields four lightsabers.  The Jedi destroys two of them and uses the Force.  Big G runs and Kenobi follows, but loses his lightsaber.  Commander Cody finds it.  Anakin learns that Palpatine is Darth Sidious when he says he can save Padmé.  He says no way and threatens to expose him.  The fight with Grievous continues.  It ends with Obi-Wan shooting the General’s internal organs with a blaster.  G dies.  No one cries.

Anakin reveals Palpatine’s identity to Mace Windu.  They confront the Sith Lord.  Sidious kills the supporting Jedi and fights Windu.  The battle is tense.  Windu wins and goes for the kill.  Anakin chooses the dark side and betrays Mace.  Sidious finishes the job and gives Skywalker the name Darth Vader.  Revenge of the Sith.  Order 66 is executed.  The clone army turns on the Jedi.  Obi-Wan and Yoda survive.  Vader murders the innocent and visits his lady.  He heads to Mustafar and executes the Separatist Council.  Nute Gunray is the last to go.  Moment of silence for Nute.

Kenobi visits Amidala and tells her that Anakin is evil.  She refuses to reveal her husband’s location.  He notices she is pregnant.  Obi-Wan goes to Mustafar.  Padmé does too.  She talks to her man and is horrified at what she sees.  She says she loves him.  Kenobi appears.  Darth Vader is upset and a duel begins.  Yoda confronts Darth Sidious.  Both fights progress.  Yoda and Sidious reach a standstill in the Galactic Senate Chamber.  Explosions.  Obi-Wan gains the high ground.  Vader ignores the tactical advantage and loses his legs and left arm.  He tumbles near the edge of a river of lava.  It is hot.  Not as torrid as Kenobi’s swordsmanship.  The victor leaves with Amidala and her droids.

Padmé dies in childbirth.  Sidious tells his apprentice that he accidently killed her.  Vader screams.  Yoda, Bail Organa and Kenobi decide to fake the newborn twin’s deaths.  Organa adopts Leia and Obi-Wan takes Luke to Tatooine.  Yoda decides to wait for when the time is right for the Skywalker kids to play their role.  Amidala is buried on Naboo.  Star Wars: Episode III – Revenge of the Sith ends.

2 comments on “Star Wars: Episode III – Revenge of the Sith”