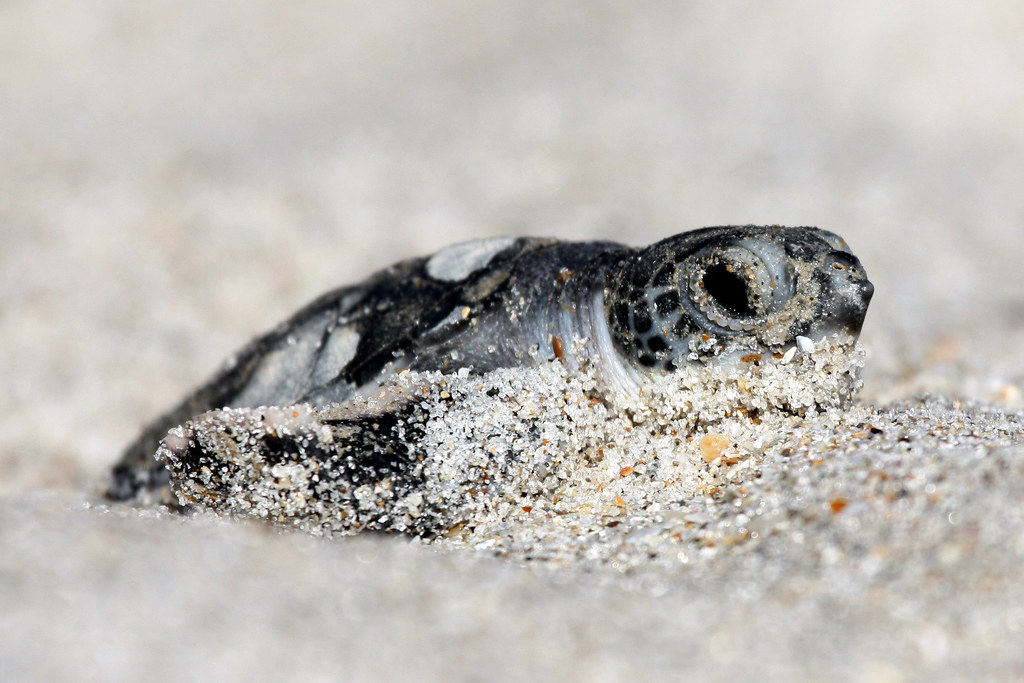 Green sea turtles are the sole species found in the Genus Chelonia.  They are members of the Cheloniidae Family.  The GST is known as the Pacific green turtle (PGT), green turtle (GT) and black sea turtle (BST).  Carl Linnaeus was the first to document the animal in the 10th edition of Systema Naturae (1758).  The common name does not reference any external green coloration.  The green refers to the color of the turtle’s fat found between their internal organs and shell.

Paddle shaped arms aid in swimming.  A beaked head sits on a short neck and flattened body.  Green sea turtles grow up to five feet long.  The shell can extend to forty-five prolonged inches.  The average weight is between one hundred fifty and four hundred twenty pounds.  Occasional adults can weigh closer to seven hundred pounds.  The largest on record weighed more than the Ninja Turtles at eight hundred seventy-one pounds.  The carapace was five feet long.

The unhooked beak and miniature snout contrasts with the hawksbill turtle.  Green sea turtle necks are incapable of retreating into their shells.  Prefrontal scales line the head.  The shell features five central scutes lined by four pairs of lateral skeletal plates.  The carapaces feature several color patterns that morph over time.  Hatchlings have black and light-colored shells.  Juveniles are painted olive and dark brown.  Adults are dyed marbled or solid brown.  Some have spots.  The plastron (underside) is yellow.

Young green sea turtles are carnivores.  Fish eggs, jellyfish, invertebrates, worms, algae, crustaceans, sponges and mollusks are all consumed.  The nutritional value is low and lends to a slow growth rate.  They become omnivores over time.  Freshwater red algae, lobster horns, sea weeds and grasses are added to the menu.  Most turtles stick to an herbivorous diet as they ease into adulthood.

Large sharks and humans are the two predators of green sea turtles.  The tiger shark is a common foe in Hawaii.  Hatchlings and adolescents are susceptible to other threats that include shorebirds, crabs and marine mammals.  Red foxes and golden jackals will hunt GST eggs.  Parasites pose a separate threat.  Leeches cause tissue damage after attaching to their flippers and skin.  Barnacles bind to the carapace.  Cestodes and protozoans creep into the liver and intestinal tract and may cause an infection.  The Ozobranchus branchiatus leech is a permanent pest that survives on green sea turtles alone.

Underwater rest and sleep are possible for several hours.  Green sea turtles will hide under rocks and reefs before closing their eyes.  Some will return to the same location every night.  The submergence time is shorter when diving for food or to escape predators.  Stress and vigorous activity lower their ability to retain air.  The lungs prevent gases from getting stuck and allow for rapid oxygen exchange.  The blood helps diffuse the intense pressures of the deep and deliver oxygen to vital body tissues.  One to three seconds of breathing provides five minutes of dive time.

The turtle will travel great distances to nest.  Some will swim thousands of miles.  The beaches of India, Central America, Southeast Asia and the western Pacific islands are the spawning grounds.  Green sea turtles will return to the location where they hatched.  Males visit every year to mate.  Females breed every two to four years.  The seasons differ between populations.  Indian Ocean variants will nest year-round.  The others are confined to a four-month window.

The same beach is used because it guarantees that the conditions for survival are present.  Ample sand and a close proximity to the ocean are crucial for the hatchling’s endurance.  Incubation temperatures and the lack of predators is required.  The insight to return is referred to as natal homing.  The female controls the tempo.  She will dig a one to two foot hole with her flippers and deposit the eggs.  The hole is covered.  Eighty to two hundred eggs are safe.  The lady sea turtle returns to the ocean.  The cycle reoccurs up to five times per season

The eggs hatch fifty to seventy days later.  The sun is down.  The moon is out.  The young crawl towards the ocean.  Their strides are short and bodies are cute.  The ephemeral moment is the most dangerous in their lifetime.  A large number fail to taste the sweet, sweet salt water.  The few that do dwell in the open ocean for three to five years before settling down.  Sexual maturity is reached after twenty years.  It can take as long as fifty.  An estimated one percent of hatchlings reach adulthood.  Green sea turtles live up to eighty years in the ocean.   Certain populations are dwindling.  Others are stable.  The species is listed as Endangered on the IUCN Red List.