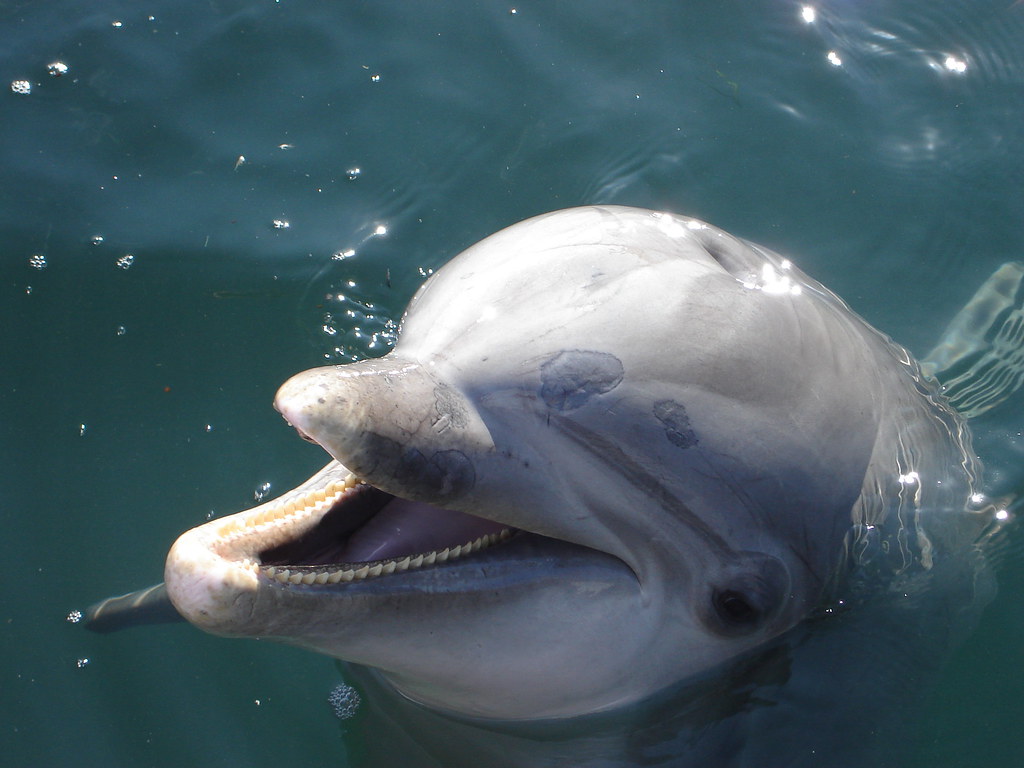 The Dolphin is an aquatic animal that falls within the Infraorder Cetacea.  There are forty extant species that are referred to as dolphins.  The most common are the Indian river dolphin (Platanistidae), the La Plata dolphin (Pontoporia), the New World River dolphin (Iniidae) and the Oceanic dolphin (Delphinidae).  The word dolphin is derived from the Greek word delphís, which translates to womb.  The result is a fish with a womb.  The Old French term for sea pig (daulphin) has roots with the dolphin too.  The world’s ancestors were infatuated with the bellies of the sea.

The body of a dolphin is shaped like a torpedo.  Their necks are inflexible and they have flippers for limbs.  They have no external ear flaps and their small eyes are set on the sides of a round head.  A brilliant flipper flows in the back.  Dolphins are between five and thirty-one feet long. The females are typically larger than the males.  The weight range begins at one hundred ten pounds and extends up to eleven short tons of the killer whale.  Orcas are a part of the oceanic dolphin family.

Porpoises have spade-shaped teeth.  Dolphins have conical ones.  The cones assist in catching fast moving prey (seals, squids and fish).  A blowhole ejects stale air and fresh air is inhaled into the lungs afterwards.  The animal has a dual chambered stomach.  Reproductive organs are located inside the body.  Their thick layer of blubber protects them from harsh climates and predators.

The blubber is thickest on the stomach and back.  There are fat cells and a fibrous network of connective tissue.  The density depends on a dolphins’ location, health, development and food intake.  Blubber helps streamline the body during locomotion.  Advanced nerve endings support sensory perception.  They are aware of trace vibrations and small pressure changes.  Blood vessels in the blubber control temperature.  The fat will constrict the vessels to reduce blood flow in cold water.  This keeps them warm without expending unnecessary energy.  Thermal windows on the dorsal fin, flippers and flukes do the opposite and release surplus energy to prevent overheating.

The tail fin is in charge of propulsion.  The dorsal fin is boneless and offers stabilization.  Dual pectoral flippers have four digits.  Everything produces a graceful swimmer.  The average speed of a dolphin is between five to seventeen miles per hour.  Orcas can cruise over thirty-four mph.  Most have a fused neck that prevents head movement, but protects them while swimming at high speeds.  River dolphins have a different build and can swing their heads up to ninety degrees in each direction.

Dolphins steer with their flippers.  They swim by moving the lower part of their body and tail fin up and down.  Some can dive deep into the ocean by slowing their heart rate.  This conserves oxygen.  Others can redirect blood to vital organs inside intense water pressures.  Hemoglobin and myoglobin of a dolphin’s body tissue are twice as concentrated as the average animal.  They are capable of storing double the oxygen.

How smart are dolphins?

The dolphin is one of the most intelligent animals on Earth.  Their habitat makes it difficult to conduct comparative studies, but extensive scientific research ranks them as one of the smartest.  Their brain weighs more than a human and they are highly sociable.  They live in pods of up to a dozen dolphins.  The discovery of an abundant food source will cause the pods to merge temporarily into a superpod.   The group can contain over one thousand hungry swimmers.

Strong social bonds are formed in the pod.  Interchange is common and members will rotate at leisure.  Dolphins will protect the injured and ill in their pod.  Their kindness is not limited to family.  They have been observed protecting beachgoers from sharks by circling around them and charging directly at the antagonist.  Other examples include protecting different species and helping wayward adolescents return to their mother.

Communication happens through numerous whistling and clicking sounds.  Nonverbal posturing and touching are used too.  Dolphins show signs of culture.  They pass techniques down to their young.  The knowledge transfer was assumed to be specific to humans and primates.  Bottlenose dolphins use sponges like tools to cover their mouth when foraging for food.  Male River dolphins use sticks and weeds to attract mates.  Copulation takes place after extensive foreplay.

What do dolphins eat?

Squid and fish are the core food source of dolphins.  Killer whales have a more diverse pallet.  A pod will work together to herd a school of fish.  Each member will swim through their prey and catch the weakest links.  A solo dolphin will corral fish into shallow water for an easy meal.  Orcas will chase their target onto a beach to strand it.  Some species can attack and stun fish or knock them out of the water completely.  There are cases of fisherman and dolphins working together with nets.  The dolphin is rewarded with the extras after luring the prey.

Sleep time occurs with part of the brain in a slow-wave state.  They keep their blowhole above the water and remain conscious enough to breath and watch for enemies.  Captive dolphins will fully sleep and a tail reflex propels them to the surface for air.  The Indus River dolphin sleeps in short intervals that last under a minute.  Their environment is littered with dangerous debris and wild currents.  Continuous swimming is pivotal for survival.