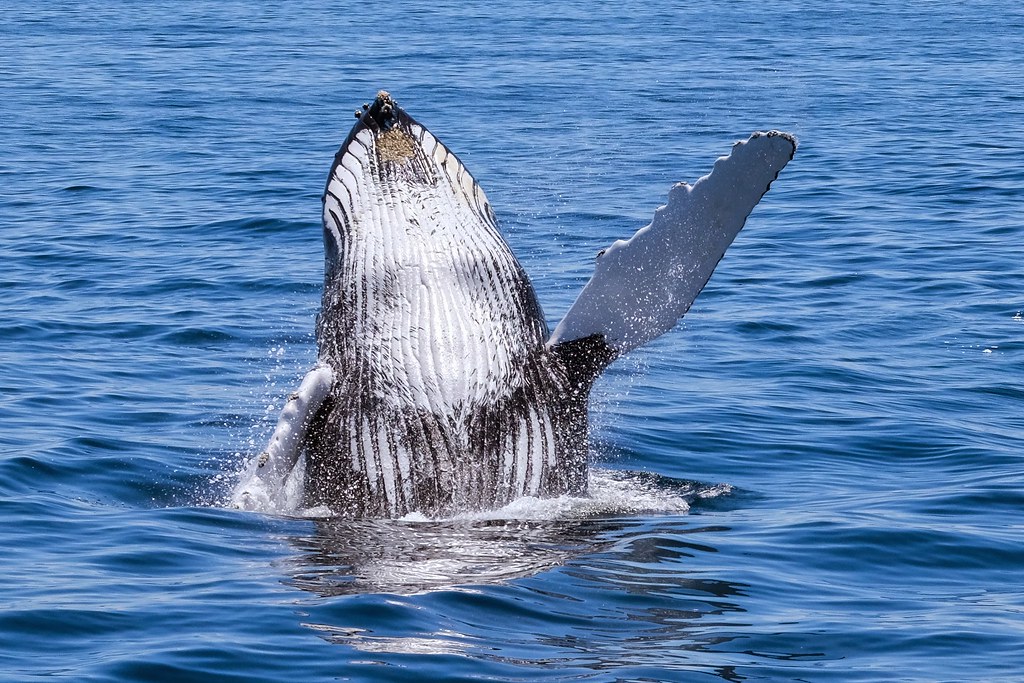 Humpback whales (Megaptera novaeangliae) belong to the largest collection of baleen whales known as Rorquals (Balaenopteridae).  There are ten species in the family that include blue and gray whales.  The humpback whale is the sole member of its genus Megaptera.  The whale from Moby Dick (1851) was a sperm whale (cachalot).  They are the only residents of the genus Physeter.  Herman Melville was a resident of New York City, New York.

The Ancient Greek generic name for Megaptera was μεγαπτερα.  The word is translated into two parts; giant (μεγα) and wing (πτερα).  The meaning relates to the whale’s enormous front flippers.  The common name humpback originated from the way their back curves when they submerge into the depths of the sea.  Genetic research completed by the British Antarctic Survey (BAS) in 2014 has determined that the humpbacks in the southern oceans are evolving away from the northern variants.  Some biologists think the trend could create separate subspecies in the future.

Female humpback whales are larger than males.  The gals average between forty-nine and fifty feet in length.  The boys grow up to forty-six feet.  The largest female on record was eighty-nine feet long and weighed ninety metric tons.  The average humpback weight is twenty-five to thirty metric tons.  Large whales grow up to forty tons (forty-four short tons).  An extensive white and black tail fin measures close to one third of their body.  The pectoral fins are proportionally the longest in the ocean.

The enormous pectoral fins are dense and help the humpback whale maneuver.  Their surface area assists with temperature control during the migration between frigid and torrid climates.  A row of knuckle shaped knobs lines the anterior (front) edges.  A species of sharp whale barnacle (Coronula diadema) mixes throughout and adds support.  The natural weapon formation assists the whale during Orca confrontations.  Humpbacks are gregarious beings and will help other species fend off predators.

The whale’s dorsal coloring is black.  An unexpected hump is visible.  The lower jaw and skull are littered with tubercles (hair follicles).  Wide ventral grooves start from the mouth and end midway along the underside of the whale. Up to four hundred dark baleen plates are fashioned on the sides of their jaws.  Each plate is close to eighteen inches in the front and three feet near the back.  The filtering system is crucial during feeding.

Krill, copepods (small crustaceans) and small juvenile fish are a humpback whale’s favorite dish.  Salmon, capelin, pollock, haddock, mackerel, herring and more are all consumed depending on the location of the whale.  Feeding occurs mainly in the summer.  Fat reserves are used in the winter.  Humpbacks sometimes group together to hunt.  They create bubble nets by diving under the surface and generating air from their blowholes.  Vertical rings shoot upwards as they circle during ascension.  The whales swim through the ensnared prey with open mouths (and hearts) and consume the delicious protein.

Do Humpback Whales have predators?

Solo hunting is accomplished through lunge feeding.  A humpback will dive beneath a school of fish and charge upwards with their jaw agape.  The seawater is swallowed and filtered at the surface.  The fish travel downwards and the superfluous saltwater is spit back into mother ocean.  Groups of killer whales are capable of harming young humpbacks.  Adults are adept in defending themselves.  Successful solo and group great white shark attacks against adult humpbacks have been recorded.  The occurrences are rare.

The lifespan of the humpback whale is between forty-five and one hundred years of age.  The mating rituals occur in the winter months and conception transpires near the equator during the summer.  Competition is fierce amongst the males.  Light confrontations and fin slapping are common behavior.  Dominance is sometimes established through song.  The female will have different partners throughout her life and breed every few years.  Gestation lasts eleven and a half months.  Very few live births have been observed.

Humpback whales reside in all of the major oceans.  The population is split into four global quadrants.  The Southern Ocean, Indian Ocean, Atlantic and Pacific inhabitants all stay in their own domain.  The total population is over eighty-four thousand and increasing.  The IUCN (International Union for Conservation of Nature) upgraded the whale’s status from Vulnerable to Least Concern in 2008.  Humpbacks were listed as Endangered in 1988.  The upward trend is due to conservation efforts and a global commitment to reduce whaling.  Ship collisions and entanglement in fishing gear are the whale’s main threats.  Noise pollution is another.  Excessive sound can fracture their ears and cause injuries.

Humpback whales are a major focal point of whale watching.  Their docile behavior and curiosity make them the perfect species for observation.  Some will swim along the boat and frolic about for several minutes.  Humpback ecotourism adds twenty million dollars per year to Hawaii’s economy.  The whales do not have a currency.  They have fins and a great attitude.  How great varies upon the definition of great and the individual whale.