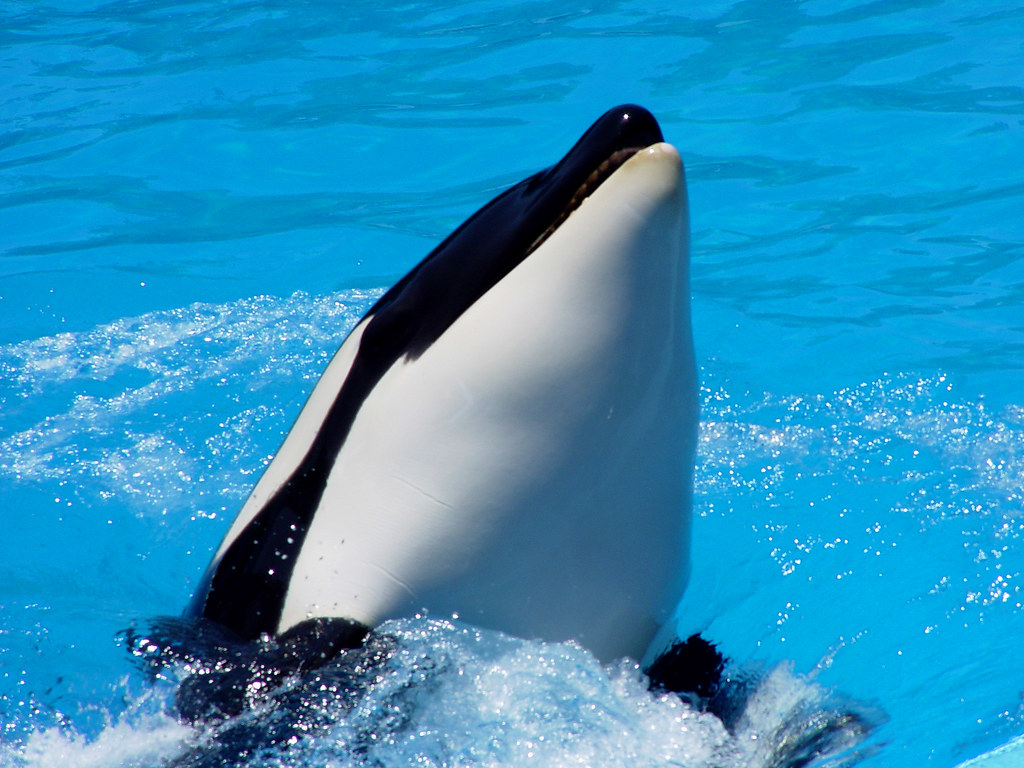 Orcas are the largest members of the oceanic dolphin family and the sole extant species in the Orcinus Genus.  They are found in every ocean and an apex predator.  Killer whale is their most common moniker.  Orcas are not whales.  Orcinus is Latin for the land of the dead.  Orcus was the god of the underworld in primeval mythology.  The Ancient Romans were the first to use the term Orca, which stemmed from the Ancient Greek word ὄρυξ or óryx.  Grampus is a retired pseudonym.  Sometimes the apex predator is called a blackfish.

Several unique populations have formed over time.  Three to five of them are exclusive enough to be categorized as their own subspecies or species.  It is believed the taxonomy will fracture in the near future.  The North Pacific waters claim three variations.  The Resident orcas are the most common and survive on fish and squid.  The females have a rounded dorsal fin.  All members coexist in family pods.  Their neighbors are the Bigg’s or Transient orcas.  They live in small groups and avoid interactions with the Residents.  Everyone in this group lives off of marine mammals.  The Offshore orcas live in isolation and travel within groups of twenty to two hundred members.

There are close to twenty-five thousand killer whales in the Antarctic.  They have been classified into four specific types.  Antarctic or Type A is the prototypical orca.  They live in open waters and have a white eye patch.  Type B is split into two factions.  Pack ice orcas (B1) are smaller than Type A and have a gray skin tone.  Their white splotches are stained yellow and they eat seals.  Gerlache orcas (B2) are smaller and enjoy dining on penguins.  They live in the Gerlache Strait.

The tiniest are the Ross Sea orcas.  Type C live in the largest groups.  Their only source of sustenance is derived from the Antarctic cod.  Their eye patch is slanted forwards as opposed to running parallel to the body.  Type D or Sub-Antarctic orcas are the rarest.  The first was documented through a photograph from the 1950’s.  The first recorded on video was in 2014.  The second was captured three years later.  They have a miniature white eye patch and bulbous head.  Type D have the smallest teeth, but the largest hearts.

Killer whales are big.  Males are between twenty and twenty-six feet long and weigh over six short tons.  The ladies are a few short tons lighter.  Their average length is around sixteen to twenty-three feet.  Calves are born eight feet long and weigh four hundred pounds.  Large and rounded pectoral fins sit atop the males.  Female fins are half the size.  Everyone has strong teeth.

Echolocation is prevalent in orcas.  Their eyesight and hearing are phenomenal.  Insulating blubber sits beneath the skin.  They are found in all oceans and most of the seas.  The worldwide population is over fifty thousand.  The Antarctic houses half of them.  Nine thousand roam the tropical Pacific.  Three thousand float in the Northeast.  One thousand five hundred live in Norway.  Two thousand live in Japan.

Orcas have no natural predators.  They are the apex.  They hunt in packs like wolves.  Some call them the wolves of the sea.  Others do not.  They spend most of their time in the shallow depths.  Sometimes they do not and dive hundreds of meters for a snack.  They enjoy socializing and resting.  Resident orcas swim with other dolphins and porpoises, with a purpose.  Their society is complex.  Females can live up to ninety years old.  Up to four generations travel together.

The second heaviest marine mammal brain belongs to the orca.  Sperm whales are the smartest  They can solve problems and demonstrate affection.  Alaskan killer whales have learned how to steal fish off of fishing lines and counteract decoys placed to deter their thievery.  Wild orcas will play with humans and move objects they are trying to reach.  Some will return snowball fire by tossing chunks of ice at their antagonists.

Females mature at the age of ten.  They breed until their fortieth year.  They undergo menopause and live for decades afterwards.  This is unique in the animal kingdom.  Gestation lasts up to eighteen months.  A single offspring is produced every five years.  Mortality is high during the first year of a calf’s life.  Up to fifty percent die before they blow out their first birthday cake candle.  The task is difficult.  Candles are hard to light at sea.  The waves are strong.  The lungs of the orca’s young are stronger.  A burst of air shoots from the birthday boy or girl’s blowhole.  It misses the flame.  The mother sighs.  The father laughs.  A second attempt.  The flame extinguishes.  A wish is made.  The water is cold.