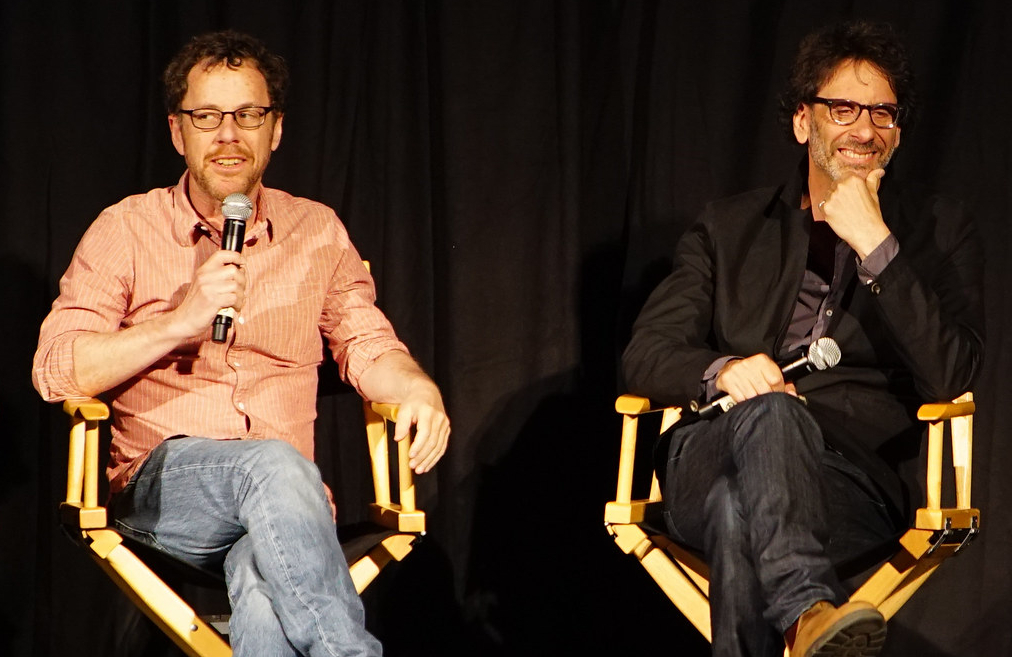 The Coen brothers are American screenwriters, producers, editors and directors.  The duo consists of Ethan Coen and Joel Coen.  They are responsible for creating several critically acclaimed films.  Their body of work has stretched over numerous decades throughout multiple movie genres.  The Coen brothers have received thirty-nine Oscar Nominations and have won six Academy Awards.

Joel Coen was born on November 29, 1954 and is the oldest.  Ethan Coen was born on September 21, 1957.  The brothers were both born and raised in St. Louis Park, Minnesota.  They have one older sister named Deborah.  Papa Coen was a Professor of Economics at the University of Minnesota.  Mama C was an art historian at St. Cloud State University.

The Coen brothers displayed an early interest in cinema.  They consumed copious amounts of television and grew up watching Italian films.  The works of Federico Fellini were a major influence.  Joel saved his money earned from mowing lawns and bought a Super 8 Camera in the 1960’s.  The brothers remade their favorite television movies and became familiar with the camera.  Lassie Come Home (1943) and The Naked Prey (1965) are a few examples.  Ethan played several small parts in them.  They transitioned and made a few original films as their skills increased.

The siblings attended high school at St. Louis Park High School.  They graduated in the early seventies and enrolled at Bard College at Simon’s Rock (Great Barrington, Massachusetts).  Ethan attended Princeton University afterwards and earned a degree in philosophy in 1979.  His thesis covered the views of Ludwig Wittgenstein.  Joel transitioned to the undergraduate film program at New York University.  He worked on his graduate film degree at the University of Texas at Austin, but left after nine months.

Joel Coen worked as a production assistant for music videos and industrial films.  He was proficient in editing and helped clean up Sam Raimi’s film The Evil Dead (1981).  The bros directed and wrote their first movie Blood Simple in 1984.  Elements of horror and noir were present and Frances McDormand was the star.  Her career exploded afterwards and she would eventually marry Joel.

Sam Raimi directed their next project.  The script was titled Crimewave and was released in 1985.  It was a financial failure, but has turned into a cult classic over the years.  The Coen brothers took over the camera on their next screenplay Raising Arizona (1987).  It featured Holly Hunter and Nicolas Cage and has since earned a place on most “Top 100 Film” lists.  Miller’s Crossing was seen by audiences in 1990 and continued the success of Raising Arizona.

Barton Fink (1991) starred John Turturro and John Goodman and won the Palme d’Or at the 1991 Cannes Film Festival.  Joel Coen picked up the award for Best Director and Turturro won Best Actor.  Barton Fink was nominated for three Academy Awards (Best Costume Design, Best Supporting Actor and Best Art Direction).  It won none.  Tim Robbins acted as the lead of The Hudsucker Proxy in 1994.  Sam Raimi co-wrote the script and Paul Newman and Jennifer Jason Leigh had major roles.  It was unprofitable, but well reviewed by the pundits.

Frances McDormand and William H. Macy were the focal point of Fargo (1996).  The budget was low.  The success was astronomical.  The Coen brothers turned seven million into a sixty million dollar blockbuster.  Joel Coen won Best Director at Cannes and Fargo was nominated for seven Oscars.  It won two (Best Actress and Best Screenplay Written Directly for the Screen).  A popular television show followed years later and takes place in the same fictional universe.

The Big Lebowski (1998) included Jeff Bridges, John Goodman and Steve Buscemi.  It was another sensation.  The black comedy and The Dude were selected for preservation in the National Film Registry by the Library of Congress in 2014.  The century turned and the Coen brothers delivered O Brother, Where Art Thou? (2000).  The story was based on Homer’s Odyssey.  George Clooney was the lead actor.  The film was nominated for two Academy Awards.  The directors lost both.

The Man Who Wasn’t There followed a year later.  The plot revolved around a barber played by Billy Bob Thornton.  Joel picked up his third Best Director Award at the Cannes Film Festival.  George Clooney returned in 2003 for Intolerable Cruelty.  Catherine Zeta-Jones played the leading lady.  The Ladykillers (2004) trailed and made money, but stalled with the critics.  Tom Hanks was the lead.  The Coen brothers regrouped and unleashed their Magnum opus.  The result was a cinematic revolution.

No Country for Old Men (2007) was an adaptation of Cormac McCarthy’s novel of the same name.  The feature simulated McCarthy’s minimalist sentence structure.  The dialog was scare and well calculated.  The viewer was sucked into a sociopathic Texas landscape and lead on a journey through multiple viewpoints simultaneously.  Tommy Lee Jones, Josh Brolin and Javier Bardem raised the model to unexpected heights.  No Country for Old Men won seventy-six awards from one hundred and nine nominations. It grabbed eight Academy Award nominations and secured four (Best Director, Best Picture, Best Supporting Actor and Best Adapted Screenplay).

A year passed and Burn After Reading came to theaters.  The motion picture involved George Clooney, Brad Pitt, Frances McDormand and John Malkovich.  The comedy grossed over one hundred sixty-eight million dollars and was well received.  The Coen brothers lowered the budget and made A Serious Man in 2009.  It was based on their childhood and was nominated for two Academy Awards that it did not win.

True Grit (2010) was nominated for ten Oscars.  It was based on Charles Portis’s novel from 1968.  It lost them all and Jeff Bridges, Matt Damon and Josh Brolin were the stars.  Inside Llewyn Davis (2013) was set in the 1960’s folk music scene in Greenwich Village.  Justin Timberlake, Oscar Isaac and Carey Mulligan rounded out the cast.  The Coen brother’s movie won the Grand Prix at Cannes and was met with rave reviews.  Hail, Cesar! was nominated for Best Production Design at the Oscars and lost.  It grossed over sixty million dollars.  The Ballad of Buster Scruggs was released on Netflix at the end of 2018.  The western earned three of its own nominations at the Academy Awards.  It failed to bring any home.

Ethan Coen is married to the film editor Tricia Cooke.  They tied the knot in 1990 and have two kids.  Joel married Frances McDormand in 1984.  They have one adopted son.  The Coen brothers have established themselves in the directorial pantheon and continue to tell unique stories to the masses.

“We create monsters and then we can’t control them.”