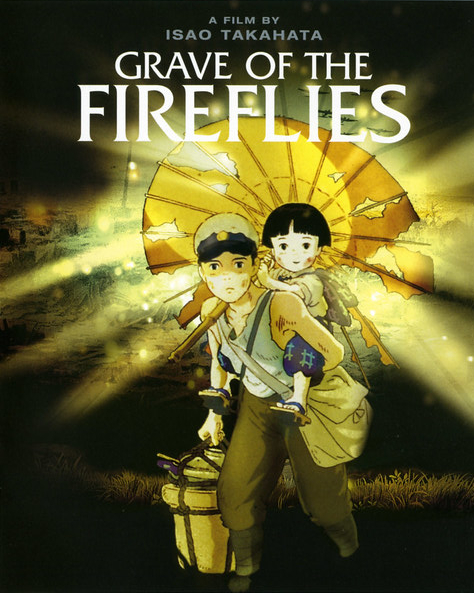 Grave of the Fireflies (Hotaru no Haka / 火垂るの墓) is an animated Japanese film.  It was published by Studio Ghibli in 1988.  The movie is based on Akiyuki Nosaka’s short story…Grave of the Fireflies (1967).  Hayao Miyazaki’s business partner Isao Takahata (Pom Poko) was the writer and director.  It was his first Studio Ghibli film.  The story takes place in Kōbe, Japan during the end of World War II.  The masterpiece was well received by the critics and ranks as one of the greatest war films of all time.

The film starts in a train station located in Kōbe.  The city is a part of the Hyōgo Prefecture.  The year is 1945.  A malnourished young boy named Seita Yokokawa appears in rags.  He is dying from a lack of sustenance.  Someone makes a rude comment about his cleanliness.  They mention that American troops are arriving and Seita’s presence is a disgrace.

Night falls on the station and a janitor walks by.  He picks up a candy tin.  The tin is tossed into a field after a loose inspection.  The ashes of Seita’s younger sister Setsuko are inside.  They spill out on impact.  A cluster of fireflies and the spirits of the siblings spring out.  The narrators arrive.

Seita discusses the tragedy of his past.  Time rewinds.  Bombs fall on Kōbe near the end of World War II.  The siblings gather their possessions and secure the homestead.  Their mother is ill and heads to the local bomb shelter.  The situation is dire in the Grave of the Fireflies.  The bombs continue and the brother carries Setsuko on his back.  They retreat towards the sea.

The onslaught stops and a megaphone begins to echo through the town.  It announces that the survivors should head to a local school.  The siblings comply and move towards the commotion.  They learn their mother was injured.  Seita abandons his sister with another family member and braves the chaos alone.  Mrs. Yokokawa’s injuries are fatal and she passes away from the burns.  Setsuko cries.  His sister comforts him.

The siblings collect some of the remains of their mother and place them in a small box.  They move in with their aunt and pen letters to their father in the navy.  Seita leaves and gathers the supplies he secured before the attack.  He returns them to his aunt and hides a tin of fruit drops for himself.

Life stabilizes over the next week.  The peace is short lived.  The aunt admonishes Seita and says he is not contributing and eating too much food.  She continues and complains about her niece.  Her nighttime crying is interrupting the others.  Seita remains calm and has faith that they will hear from their father soon.

Time passes.  The siblings play on the beach during the day.  The situation back home worsens.  The aunt continues to berate the brother and forces him to sell his mother’s belongings for rice.  He departs with a beautiful kimono and Setsuko is sadden by the loss of the heirloom.  Night falls and an air raid swarms the town.  The siblings find an abandoned sanctuary and leave.

Setsuko and Seita make the bomb shelter their own.  They use their imagination to transform the architecture.  The pair collect fireflies and release them inside.  The bugs illuminate the enclosure.  The light reminds them of fireworks and a better time. The children go to sleep. The bugs die. The brother awakens to his sister digging a hole.  He asks her why and learns it is a grave of the fireflies.  The interaction reminds Seita of his mother and he begins to cry.  He promises to take his sister to visit her grave site.

The food supply runs low.  The pair begin to starve.  The brother steals from various farmers to feed his sister.  His is caught and takes Setsuko to the doctor.  He informs Seita that she is dying from malnutrition.  They return home.  News of their father’s death arrives and the brother panics.  He buys food with the remainder of their mother’s inheritance.

Seita brings the food to his sister.  She is hallucinating and thinks her surroundings are made of food.  The brother prepares the meal, but it is too late.  Setsuko dies from hunger.  The death causes him to slip into a catatonic state.  He snaps out of it.  Seita cremates his sister with the help of a farmer and places her ashes in the tin from the beginning.  Fireflies swirl about.

The brother wanders around with the tin and a photograph of his father.  He meets the same fate of his sister and passes on near the train station.  Time forwards to the present and the siblings reunite.  They embrace and Setsuko falls asleep on Seita’s lap.  Several fireflies glow around them.  The narrator turns to the audience and moves his sister’s head towards a cluster of skyscrapers and the light of a modern city.  Grave of the Fireflies ends.

Grave of the Fireflies Cast

8 comments on “Grave of the Fireflies”