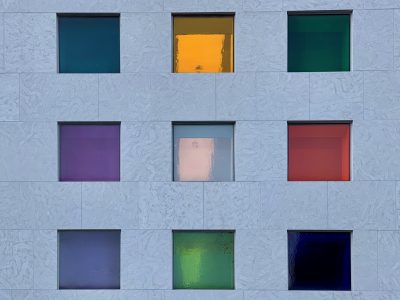 Austin is a city in Texas and an astonishing building designed by Ellsworth Kelly.  It is erected on the grounds of the University of Texas at Austin outside The Blanton Museum of Art.  Blanton is not bland.  It does have a ton of art and is close to 190,000 square feet.  It is one of the largest campus art museums in the United States, with 18,000 pieces.  Ellsworth gifted the design of Austin in the beginning of 2015.  The modernist concept was a 2,715 square foot stone building.  Inspiration for the design stemmed from Byzantine and Romanesque architecture that Kelly absorbed during his studies in Paris.

Ellsworth conceived the building in the eighties.  The structure resembled a chapel, but it was not indented to be a religious configuration.  It was a work of art and designed to be accessible to the public.  Kelly tied these requirements to Austin, with the addition that it would be protected from removal.  The Blanton guaranteed it would be built to these conditions.  It opened in February  2018.

Kelly’s first blueprints were labeled “Cramer chapel”.  Douglas S. Cramer owned a vineyard in Santa Ynez, CA near Santa Barbara.  Douglas was a collector of Ellsworth and encouraged the project.  His idea was to build a pavilion in his vineyard.  Kelly drafted several graphite drawings with intense specifications.  Each wall was to be 20 feet wide.  The arms of the building were 20 feet in length and width.  The central ones were 25 feet.  The arches were 14 feet, creating a 10-foot radius that totaled 24 feet.  The detail covered all aspects down to the location and sizing of the stain glass windows.  By 1989, the design was completed and Tom Ochsner joined the team to flush out the architecture.

The design never evolved past a concept and Kelly did not believe it would be built.  A gallery owner in Houston changed everything.  The owner’s name was Hiram Butler.  He attempted to realize the project in Houston and failed.  Still determined, he reached out to The University of Texas at Austin (his alma mater).  This led Butler to the philanthropists Michael and Jeanne Klein.  Jeanne transitioned the idea to the director of The Blanton Museum of Art, Simone Wicha.  She recognized the potential and significance of Kelly’s vision.  Her campaign gained traction with university leadership in December 2012.  Kelly and The Blanton considered a partnership in early 2013.  The sole connection The Blanton had was the ownership of his 1960 paining High Yellow.  Simone, Jeanne and Michael joined forces with art collectors Suzanne Deal Booth and her husband David to secure the seed money for the project.  Overland Partners were hired to begin the process.

In 2013, one million dollars of university funds were committed with the blessing of Bill Powers (the president of the university at the time).  The Blanton family rallied their support soon after.  Jack Shear (Kelly’s partner and president of the Kelly Foundation) visited in March 2014 to continue negotiations and view the project site.  The Board of Regents approved everything in early 2015.  The campaign secured the necessary $23 million to achieve the dream in December 2017.

Ellsworth updated the building’s scope for Texas.  Thicker walls were added and lengthened to 28 feet.  Internal spacing was adjusted too.  The original stone plotted for California would degrade in the Texas climate.  Light gray limestone from Spain was selected as a replacement.  Nine widths and three different heights were used to format Austin.  The 1,569 stones were cut and finished by hand before they were assembled.  The flooring was crafted in granite.  The door was made from a Texas live oak tree.

Thirty-three mouth blown glass windows were fashioned in Germany by Franz Mayer & Co.  They form three large windows that emit light inside the building.  The light is ever shifting and altered throughout the day and seasons.  A glow cascades over the entire interior, providing the visitor with another element of reflection.  Fourteen 40” x 40” white and black marble panels line the interior.  The white marble was imported from Carrara, Italy and the black from Belgium.  A parallel to light and dark, good and evil, yin and yang can be drawn from their presence.  Salvaged redwood is sculpted into an eighteen-foot totem.  This is the focal point when entering and represents man.

One of Kelly’s sculptures, Untitled (Rocker VIII), sits outside the façade of Austin.  It folds an elliptical shape and demonstrates the relationship between two and three-dimensional spaces.  These forms live in some of Ellsworth Kelly’s paintings.  The sculpture breathes real world geometry into life.  It gives the viewer the ability to design their own image in the middle of nature and become the architect.  Private and personal meditations are interpreted to construct a secret piece of art.

If you decide to visit Austin, The Blanton has a few simple rules.

Here are the actual rules:

“Please do not touch the art, including the wood totem and the marble panels” – No touching (and fighting).  Let the art touch you.

“Non-flash photography is permitted” – Turn that flash off!

“No food or beverage is allowed” – Do not enter on an empty stomach.

“No backpacks are permitted inside” – Enter lightweight and leave mentally fulfilled.

“Please silence electronic devices” – Austin is as stimulating as a motion picture, treat your electronics like you are in a theater.

“Please respect the quiet nature of this space” – This is important for community reflection.

Austin is an astonishing achievement and a living testament to the brilliance of Ellsworth Kelly.