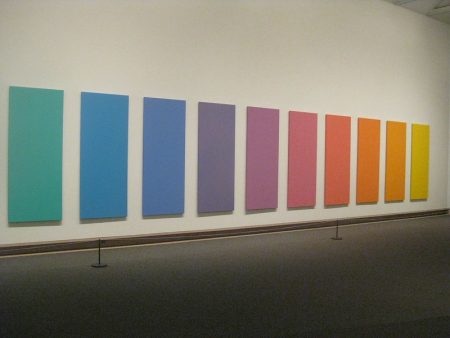 Ellsworth Kelly was a printmaker, painter, sculptor and born on the 31st of May, 1923.  He was the middle child and came into existence in Newburgh, New York.  Newburgh is north of New York City.  New York City is “The Big Apple”.  The nickname was generated in the Roaring Twenties by the sports writer John J. Fitz Gerald.  Big Ells,  Capital “K”, or KellE could be suitable nicknames for Ellsworth Kelly, but that is conjecture.  Ellsworth is a fine name standalone.  It turns out it was derived from the surname “Ellsworth”, which comes from the name “Ellesworth” that originates from the words “Eli” and “worth”.  The synergy is that Kelly’s work is worth a lot and has sold for several millions.  His painting Red Curve fetched $4.5 million at auction and his series Spectrum VI went for $5.2 million.  Quick math brings us to $9.7 million.  Not bad for our protagonist, not bad at all.

He moved from Newburgh to Oradell, New Jersey when he was a boy.  Ellsworth’s grandmother introduced him to ornithology (the study of birds).  Popular thought is that the brilliant colors of the birds he observed flew into his canvases later in his career.  He studied at Pratt Institute in Brooklyn from 1941-43 before entering the Army.  He returned and studied at the School of the Museum of Fine Arts in Boston, before moving on to the École nationale supérieure des Beaux-Arts in Paris (France).  The École des Beaux-Arts has educated numerous famous artists including, Henri Matisse and Robert Jay Wolff.  He cultivated his style in Paris and returned home in 1953.

His first show was in New York City in 1956.  The exhibition was at Betty Parsons’ gallery.  Betty is considered a pioneer of American avant-garde art.  You can betty on that.  Show number two was in in the same place different time (1957).  He was featured in the “Young America 1957” exhibit at the Whitney Museum of American Art.  Located on 99 Gansevoort Street, Lower Manhattan, it is also referred to as the “Whitney”.  It was founded in eponymous fashion through Gertrude Vanderbilt Whitney.  She was a sculptor too.

Ellsworth moved to Spencertown, New York in 1970 where he worked in a large studio designed by the architect Richard Gluckman.  He passed away in Spencertown on 12/27/15.  Added together you get the number 54, which has no significance to this story, but was the name of the famed nightclub “Studio 54”.

The late work of Claude Monet was the catalyst for Kelly’s shift to abstract painting.  He reinforced the use of painted planar shapes and geometric figures.  In the 1960’s he manipulated the canvas itself.  He used curved corners and atypical formations that allowed his work to transcend the two-dimensional front and bleed into the wall that it was displayed on.  The focal point moved from the image to the environment.  The foreground and background of the room molded into the interpretation, transfixing the viewer.  In 1970 he incorporated curved shapes.  To recap, the canvas was curved and now the shapes are!  His painting Green White was the first appearance of the triangle.  For those unfamiliar, a triangle has three sides, not four.  Four sides would be considered a quadrilateral.  Five sides are a pentagon, six is a hexagon, heptagon (7), octagon (stop sign, ok let’s stop), one more – nonagon (9),  one…more…decagon(10).  His late work evolved into the combination of both flat and curved shapes presented on top of each other.

Body builders sculpt their bodies, Ellsworth Kelly sculpted art.  He made around thirty wooden sculptures.  He created freestanding folded sculptures and large outdoor pieces.  Kelly molded bronze, steel and aluminum into tall masterpieces measuring near fifteen feet tall.  Some carry a width of fourteen feet.  That comes to one foot less than the height.

He created several drawings of plants in his career.  Some of them were simple and some were complex studies on flowers and leaves.  This evolved into printmaking and lithographs of foliage during the 1960’s and 70’s.  These include Suite of Plant Lithographs and Purple/Red/Gray/Orange.  The later was eighteen feet tall and one of the largest lithographs created.  A lithograph is a printing process where the artist makes a mirror image on a stone or metal plate.  It is treated with chemicals to set the image.  A clone is created by applying ink to the plate and pressure to paper in order to transfer the art.

Ellsworth Kelly’s influences began with the colorful plumage of birds.  His time in the army introduced him to the properties of camouflage and the use of shadow and visibility.  In Paris he learned how to draw without looking at the image.  Byzantine and Roman architecture scattered throughout this city played a role.  Pablo Picasso and Henri Matisse can be credited too.

Kelly has many public commissions.  One was a steel sculpture in the Guggenheim’s Peter B. Lewis theater titled Wright Curve.  Curve XXII can be found at Lincoln Park in Chicago.  A mural in the UNESCO headquarters hangs in Paris.  The Houston Triptych is mounted on concrete at the Museum of Fine Arts, Houston.  Dallas Panels (Blue Green Black Red) is in, you guessed it, the Morton H. Meyerson Symphony Center, Dallas.  Blue Black is at the Pulitzer Arts Foundation (St. Louis) and The Boston Panels are in the John Joseph Moakley United States Courthouse (Boston).  The stainless-steel sculpture Berlin Totem stands forty feet tall in the courtyard of the Embassy of the United States in Berlin.  The Louis Vuitton Foundation in Paris hosts Spectrum VIII.  The most ambition piece was a free-standing building for a private collector.  It was not completed, but the design was acquired by the Blanton Museum of Art at the University of Texas, Austin in 2015 and completed on 2/1/18.  It is titled Austin and a monument to his career.  It is open to the public and can be visited today.

“I think that if you can turn off the mind and look only with the eyes, ultimately everything becomes abstract.”