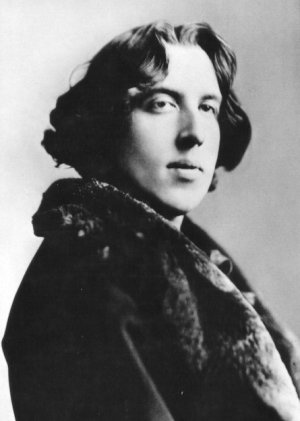 Oscar Wilde, full name Oscar Fingal O’Flahertie Wills Wilde, was born in Dublin, Ireland on October 16, 1854.  The content he produced throughout his lifetime was as varied as his name.  He wrote essays, articles, stories, plays and poems.  He authored a novel called The Picture of Dorian Gray.  Words that rhyme with “Oscar”:  boxer…and…hmm…soccer.  This concludes the linguistic rhyme study.  An etymologist would be proud of this analysis.  They study the history of words, not insects.  That is an entomologist.  A Sesame Street-ologist would determine that the name Oscar is closest to the character Oscar the Grouch (a crowd favorite).  This puppet’s original color was orange in Season One (1969-1970) before making the permanent switch to green.  His girlfriend’s name is Grundgetta.  She is green too.

Sir William Wilde was an ophthalmologist (disease and anatomy of eyes) and otolaryngologist (ear, nose and throat – an Ology overload).   He was Oscar’s father.  Oscar was homeschooled until he was nine.  Portora Royal School (1 Lough Shore Road, BT74 7HA Enniskillen, Ulster Northern Ireland) was his home from 1864-1871.  He studied at Trinity College in Dublin between 1871-1874 and finished first in his class during year one.  He ended his tenure by winning the highest academic honor, the Berkeley Gold Medal in Greek.  One of his professors was Sir John Pentland Mahaffy.  Mahaffy encouraged Wilde’s interest in Greek literature.  This tutelage paid dividends and Oscar won a demyship (scholarship) to Magdalen College, Oxford.

Wilde was known as a wild one during his Magdalen years (1874-1878).  He joined the aesthetic movement, which stressed aesthetic values in art over social and political ones.  Oscar let his hair grow long (wild) and opposed most traditional masculine sports.  The exception was boxing (Oscar – Boxer).  Blue china, flowers and peacock feathers adorned his lavish dorm.  This decadence was the inspiration for his famous for saying, “I find it harder and harder every day to live up to my blue china.”  This became a slogan of the aesthetes.  British undergraduate degree classification includes First-class, Second-class (Upper and Lower division) and Third-class honours.  In 1878, Oscar graduated with a double first and his poem Ravenna secured him the Newdigate Prize.

He moved to Dublin after Oxford and in 1881, settled into a bachelor pad in London.  He published a collection of poems titled Poems.  A well-received American lecture tour occurred in 1882.  He often mingled with the working class.  Wilde moved to Paris in 1883.  His legend and aesthetic aura continued to grow.  Wilde married Constance Lloyd on May 29, 1884.  She died of an illness in April 1898.

Oscar was the editor of The Lady’s World magazine in 1887.  He injected his own flair into the publication and renamed it to The Woman’s World.  He left the magazine in 1889 after finding his literary voice.  He published several pieces of short fiction.  Some notable examples are A House of Pomegranates and The Portrait of Mr. W. H.  His sole novel, The Picture of Dorian Gray, was released in 1890.  His play titled Salomé debuted a year later.  The play was a tragedy about the stepdaughter of the tetrarch Herod Antipas requesting the head of John the Baptist on a silver platter.

Wilde was introduced to Lord Alfred Douglas in 1891.  They began a relationship and Oscar introduced Douglas to the Victorian underground.  The Marquess of Queensberry (Alfred’s father) accused Wilde of corrupting his son on February 18, 1895.  A marquess is a British nobleman ranking above an earl and below a duke.  This accusation carried serious clout.  Oscar countered, against the recommendation of his inner circle, with a libel lawsuit.  Queensberry was arrested and it went to court.  The marquess was acquitted and the fallout left Wilde bankrupt.

He was arrested on 4/6/1895 under Section 11 of the Criminal Law Amendment Act 1885.  The crime was for gross indecency.  It went to trial and Wilde lost again.  His imprisonment was from May 25, 1895 – 5/18/1897.  The first months of his sentence were at Pentonville Prison (Barnsbury, London, N7).  He was moved to Wandsworth Prison (Wandsworth, London, SW18).  Hard labor and hunger caused illness and Oscar ruptured his right ear drum during a fall.  He was hospitalized for two months.  He was moved to his final location Reading Gaol (Reading, Berkshire) soon after.  The suffering of a prisoner led him to write his poem The Ballad of Reading Gaol.  Wilde was released and moved to France.  He never returned to the United Kingdom.

The Society of Jesus rejected Wilde’s request for a Catholic retreat.  This set him on a downwards impoverished spiral.  In the end of 1900, Oscar developed meningitis (inflammation of the protective membranes in the spinal cord and brain).  He died a few days later at age 46.  The cause of the disease is disputed.  The biographer Richard Ellmann claimed it was syphilitic.  Others noted that surgical procedures on his damaged ear could have been the main factor.  Wilde was buried in Pairs at Cimetière de Bagneux.  He was transferred to Père Lachaise Cemetery in 1909.  The gravesite is a popular tourist destination and an affirmation of Oscar Wilde’s imprint on our culture.  His viewpoints and art were ahead of his time, but are appreciated in our society today.

“Be yourself; everyone else is taken.”