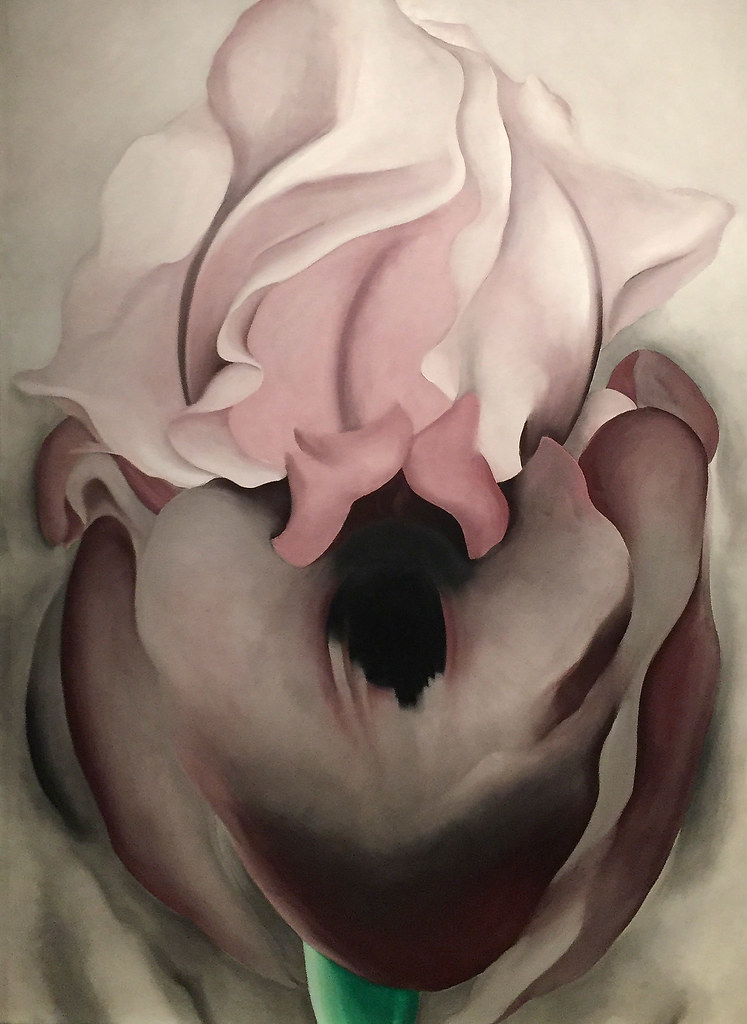 Georgia O’Keeffe was an artist and the mother of American modernism.  She was born on November 15, 1887 in Sun Prairie, Wisconsin.  Her parents Francis and Ida O’Keeffe were dairy farmers.  Her grandfather was named George Victor Totto.  He was a Hungarian count who moved to the United States in the mid eighteen-hundreds.  She was named after him.

Georgia had six other siblings.  She was the second oldest.  Art was her passion.  She decided it would become her profession at the age of ten.  A local watercolorist tutored her and her sisters Anita and Ida.  O’Keeffe completed two years of high school in Wisconsin.  The family moved to Virginia.  She graduated in 1905 and was enrolled at the School of the Art Institute of Chicago (SAIC).  She left to convalesce from an illness in 1906.  Georgia was ranked at the top of her class.

She resumed her studies at the Art Students League in New York City in 1907.  Her free time was spent visiting galleries.  A year later she won the William Merritt Chase still-life award.  Her father went bankrupt.  She dropped out of school and worked as a commercial artist in Chicago for two years.  She stopped painting for four years.  She taught art in the public school system of Amarillo, Texas instead.

O’Keeffe resumed her studies during the summertime at the University of Virginia.  The coursework was fundamental to her development and transition into American modernism.  Painting resumed.  Georgia sent a few samples to a friend.  The artwork was received by the photographer and art promoter Alfred Stieglitz.  Alfred was hooked.  Ten of the pieces were displayed in his gallery.  The two began a relationship.

Stieglitz encouraged Georgia to transition from watercolors to other mediums.  Their use was associated with amateurs.  The young artist obliged.  Alfred took care of the finances and introduced her to other artists.  Her skillset deepened.  Leaves, flowers, rocks and simplistic nature became the focal point of her subject matter.  Petunia, No. 2 was her first full-sized floral painting.  It was completed in 1924.  The couple married.  The painting was exhibited the following year.

The pair moved to New York.  Architecture replaced nature.  Skylines and skyscrapers filled the canvas.  Four years passed.  The cityscapes stopped.  Georgia O’Keeffe traveled to Taos, New Mexico with a friend.  The Taos Mountains were visible from her window.  She explored the highlands and desert terrain.  Inspiration consumed her.  She spent time in New Mexico every year moving forward.

The arid climate infiltrated her artwork as her popularity swelled.  She stopped painting due to a nervous breakdown in 1933. The catalyst was her husband’s affair.  Georgia was prolific again by 1934.  Ram’s Head, White Hollyhock-Hills (1935) and Summer Days (1936) announced her return.  The success was instant.  The idyllic skulls, her evolution.  Corporate interest grew.  An adverting agency commissioned her to produce a set of paintings for the Hawaiian Pineapple Company (Dole Food Company).  She was fifty-one years old.

The artist traveled to Hawaii.  Twenty vibrant paintings were created.  None were of the requested pineapple.  A pineapple plant was sent to her studio in New York.  Pineapple Bud (1939) was finished in Manhattan.  In 1943 she had her first solo show at the Art Institute of Chicago.  Her next was at the Museum of Modern Art in New York.  She had the first one-woman retrospective in MoMA history.  The year was 1946.  Her husband passed away in July.  Alfred Stieglitz was eighty-two.

The tragedy placed Georgia in New York for three consecutive years while she settled her husband’s estate.  In 1949 she finished and permanently moved to New Mexico.  She continued to paint and incorporate her desert surroundings in her work.  An exhibit of her art was held at the Worcester Art Museum in 1960.  A decade later the Whitney Museum of American Art unveiled the Georgia O’Keeffe Retrospective Exhibition.

Macular degeneration disturbed O’Keeffe’s eyesight in 1972.  She was left with peripheral vision only.  She was unable to use oil paints without assistance.  She soon returned to water colors and hired an assistant in 1973.  John Hamilton lived with Georgia for the remainder of her life.  He was fifty-eight years younger and taught her how to work with clay.  An autobiography titled Georgia O’Keeffe was published in 1976.  It was well received and a best seller.  Hamilton helped with the writing.  The artist’s health declined.  The two moved to Santa Fe in 1984.  She passed away on March 6, 1986.  Georgia O’Keeffe was ninety-eight.  Most of her sixty-five million dollar estate was left to Hamilton.  The O’Keeffe family contested the will and it was settled out of court.

The nonprofit Georgia O’Keeffe Foundation was founded using a portion of the estate.  In 1996 her painting Jimson Weed/White Flower No. 1 sold for over forty-four million dollars.  It is the highest price ever paid for a female painting.  The Georgia O’Keeffe Museum opened in Santa Fe in 1997.  Her artwork is cherished today.

“It’s not enough to be nice in life. You’ve got to have nerve.”