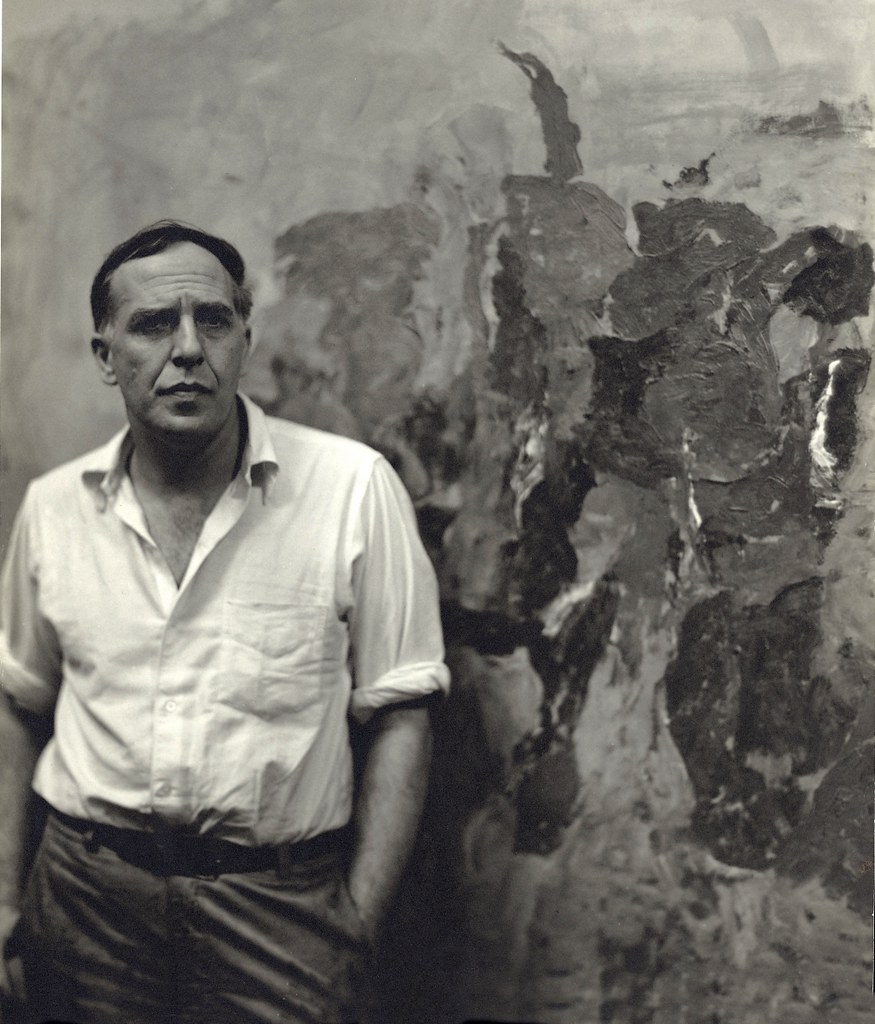 Philip Guston was born on June 27, 1913 as Phillip Goldstein in Montreal, Canada.  His parents immigrated from Russia to Canada in 1905.  They had seven children.  Little Phillip was the youngest.  The Guston’s moved to Los Angeles in 1919.  The economic landscape was dire and the patriarch Louis ended his life in 1923.  The ten-year-old artist was the one to discover his father’s body.

Philip was interested in newspaper cartoons at a young age.  His mother encouraged him to draw.  In 1927, Guston attended the Manual Arts High School in Los Angeles.  He was fourteen.  Philip was classmates with Jackson Pollock and the two stayed lifelong friends.  They became accustomed to modern European art and were expelled a year later.  The cause was their publication of a satirical leaflet that they distributed throughout the school.  Jackson was allowed to return, but Guston was not.  1928 was the last year of Philip’s formal education.

The autodidactic artist worked various part-time jobs while he honed his craft.  In 1930, Philip Guston earned a scholarship to study at the Otis Art Institute (Los Angeles).  The structure and format did not agree with his budding talent and he dropped out in the first few months.  The Otis endeavor was not a complete failure.  Philip met his future wife Musa Jane McKim in the classroom.

Some time passed and Guston was hired to paint murals.  Mexican artists were a big influence and the content was political in nature.  In 1932, he met the artist David Alfaro Siqueros during a painting session.  The Stanley Rose Bookshop in Hollywood hosted an art exhibit with Philip’s work a year later.  The event was his first gallery showing. With David’s assistance, he traveled south to Mexico and collaborated on a mural with some other artists.  The result was The Inquisition (1935) and it received much praise.  In 1935, Philip returned to California and officially adopted the name Philip Guston.

Guston linked up with Jackson Pollock in New York during the second half of 1936.  He continued painting murals.  The following year he married Musa and the newlyweds moved into their own apartment.  In 1939, he was commissioned to create a mural (Maintaining America’s Skills) for the New York World’s Fair.  The art was destroyed when the building was leveled the following year, but it won the fair’s competition for best outdoor mural.

As fame increased, Philip was featured in several exhibits.  He moved to Woodstock in upstate New York and completed Gladiators (1940).  In 1941, he finished his first polished easel painting titled Martial Memory.  It was exhibited at the Direction in American Painting show in the same year.  Two years later his daughter was born.  She was named after her mother.

Philip’s first solo painting and drawing exhibit took place at the University of Iowa in 1944.  His masterpiece of the period was finished in 1945 and called If This Not Be I.  Guston began teaching at Washington University in St. Louis in 1946.  His work took a new turn and he experimented with a less realistic subject matter.  Praise was high, but he was dissatisfied with his output.  He moved back to upstate New York in 1947 for a change of pace and was able to finish some ongoing paintings (The Porch II and The Tormentors 1947-48).

1948 and the first half of 1949 were spent studying and painting in Italy.  Philip returned to New York in the fall of ’49.  He continued to evolve his style in the 1950’s and moved towards abstraction.  He was a part of the Abstract Expressionists that included Willem de Kooning, Mark Rothko, Franz Kline, Jackson Pollock, Clifford Still and others.  The group lived and worked around Tenth Street in Manhattan.

Rothko, Pollock, Kline, De Kooning and Guston joined the Sidney Janis Gallery in 1955.  Philip was displayed regularly until the early 1960’s.  Minimalism crept into Guston’s paintings throughout the decade.  The style manifested itself by 1958 and was epitomized in his work Drawing (1960) and Still Life (1964).  The Guggenheim Museum (New York) showed over one hundred of his paintings in 1962.  The selection included Guston’s artwork from the 1930’s to his current pieces.  The exhibit traveled to London, Los Angeles, Brussels and Amsterdam over the next year.  The direction of his style received mixed reviews and Guston was hard on himself.

Philip had an affair and separated from his wife.  They reconciled in 1967.  He felt trapped in his art and struggled to find a new direction.  He stopped painting and took to creating pure drawings.  The pictures were a catalyst for his rebirth.  He broke from abstraction and the master of figuration (Neo-Expressionism) arrived.  The Studio (1969) was the painting that marked his transformation.  Time passed and his style flourished in upstate New York as he stayed out of the city.

Guston linked up with another Philip exile of New York City and his literally equivalent.  It was none other than Philip Roth who recently fled the writing scene of the city.  The two became friends and spent long evenings discussing their disdain for their respective artistic circles in New York.

In 1970, thirty-three new paintings were shown at the Marlborough Gallery (New York).  The response was heated, but his impact was apparent.  Philip Guston had carved his own path, an accomplishment most artists never achieved.  The artist fled to Italy for a few months and his output was explosive.

Roth and Guston regrouped in 1971 and compared their writing and art.  Roth took a satirical turn that Guston absorbed.  He moved his work to the David McKee’s gallery in 1974.  His teaching work with Boston University earned him the Distinguished Teaching of Art Award from the College Art Association in 1975.  Philip’s output became manic in 1976.  The master created over forty of his greatest works in the same year.  He unhooked his phone and would work for more than twenty-four hours at a time.  Guston would catch a few hours of sleep and repeat the cycle.

Musa was hospitalized in 1977 and Philip slowed down his work habits.  She recovered in 1978 and he returned to a normal schedule.  His own health began to deteriorate in 1979.  Guston was a heavy drinker and smoker his entire life and it caused his own hospitalization after a heart attack.  His professional life reached its apex and his vices combined with the attention were too great.  On June 7, 1980, Philip Guston suffered a second heart attack in his own home.  It proved to be fatal and he passed away at sixty-six years of age.  His body of work lives on today.

“Frustration is one of the great things in art. Satisfaction is nothing.”