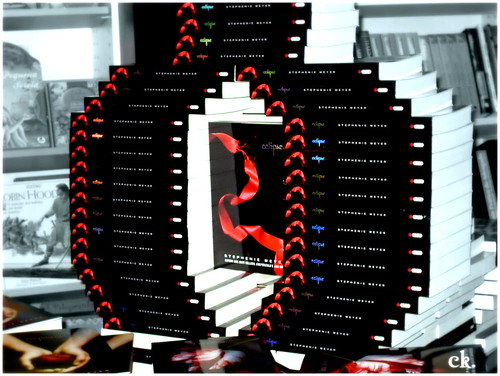 Eclipse is the third story in the Twilight series.  Stephenie Meyer released the highly anticipated novel in the middle of 2007.  The story continues after Twilight and New Moon and follows the protagonist Bella Swan and her main man Edward Cullen.  Eclipse was the fourth best-selling book in 2008 and sold over one hundred fifty thousand copies on its release day.

Bella is filling out college applications with Edward at her kitchen table.  Big Ed is wise and immortal and figures he can go wherever he wants.  His first choices are Vampire State University (VSU) and Dracula College (DC).  Ed is still unsure.  He is not certain his woman has a shot at DC and it is on the east coast.  More thoughts flood in and Papa Swan looks up from the newspaper.

The breaking news is lurid and murders are on the rise in nearby Seattle, Washington.  What could be worse?  The killer has avoided the authorities and is still on the loose.  Edward assumes it is a new vampire with an insatiable lust for blood and has chosen murder as a profession.  The gossip ruins Bella’s and his day.

Eclipse continues and the love triangle gets complicated.  Edward and Jacob are not getting along.  Bella explains that she loves Edward, but still wants to be friends with Big Jake.  She has a strong connection with him and he saved her countless times in the previous novel.  Edward understands, but has no clue what book Bella is talking about.  She begs him to control his emotions and he does.

Jacob does not like Edward for two reasons.  The first being that his is moving in on his lady.  The other is because he thinks that the vampire broke her heart when he abandoned her.  Bella says that he left in order to protect her.  A complicated feeding cycle and the vampire life were the reasons.  Jacob does not fully understand, but decides that he cannot help loving her and will continue to protect her.  He declares he will be on the lookout for the villain from the last story.  Bella has no idea which tale Jacob is talking about and thanks him.

Time passes and someone breaks into the Swan household.  Bella notices that some clothes are missing and Big Ed pulls out his magnifying glass and tweed suit.  He exhales thick pipe smoke and picks up the scent of another vampire.  It is not Victoria’s musk and he scratches his head.  Edward determines that it could be one of the Volturi vampires.  He sighs and Bella says oh my!

The idea is that the Volturi are in town to confirm that Bella has been turned into a vampire.  Bella has a hunch and thinks that Victoria is behind the intrusion, even if she wasn’t the direct invader.  Alice Cullen has a vision that Victoria has returned in order to avenge the death of James.  She invites Bella over for a slumber party.  They watch horror movies, eat popcorn and Bella learns about the vampire Rosalie and her transformation.  She still wants to be a vampire, but decides to still think it over.  Time turns and Edward proposes to Bella.  She agrees under one condition.  The marriage needs to be consummated while she is still a human.  The plot of Eclipse thickens.

No one is thrilled with the prospect of a clash with Victoria.  The Cullens deduce that she has created a new army of vampires.  They seek the help of the Denali Coven, but are rejected.  Bella responds by asking Jacob for assistance.  She decides that he has a great set of muscles and would be an excellent ally to have during a fight.  Jacob agrees and pledges the support of the other werewolves.  Everyone prepares for war.

Bella, Edward and Jacob head to the mountains.  The hike is long, but the kids are in great shape and they build a camp in no time.  Edward is on firewood duty and Jacob secures the permitter.  Bella uses her artistic talent to make the outdoors feel more like home.  The preparation is completed and Jacob’s boy Seth Clearwater links up with them to watch the events unfold.  Seth is an affable lad with a positive disposition.  Everyone welcomes Mr. Clearwater into the fold and appreciates the additional support.  Seth makes a hilarious joke and everybody laughs.  His timing is impeccable.

The onslaught begins and Jacob eavesdrops on Bella and Edward’s personal conversation.  He learns of their engagement.  This breaks his werewolf heart.  He slides into immediate depression and sadness.  Jacob threatens to join the ongoing conflict in an act of suicide.  Bella eases his pain and gives him a big smooch.  Jacob loves the kiss.  Bella is a phenomenal kisser.  Emotions flood into Bella’s head and she discovers that she still has strong feelings for the werewolf.  Jacob smiles.  Bella blushes.

Victoria does vampire things and uses her supernatural abilities to track Edward’s scent.  She trudges on and discovers the teenage campgrounds.  Edward rises to the occasion and slays Victoria.  The werewolves and the Cullens defeat the others.  Champagne is popped and the good guys celebrate.  Forks is safe again.

Bella lets Jacob know that she has feelings for him, but loves Big Ed more.  Jacob realizes that he has entered the friend zone and turns into his animal form.  He runs away.  Bella tells her dad that she has decided to marry a vampire.  Eclipse ends.