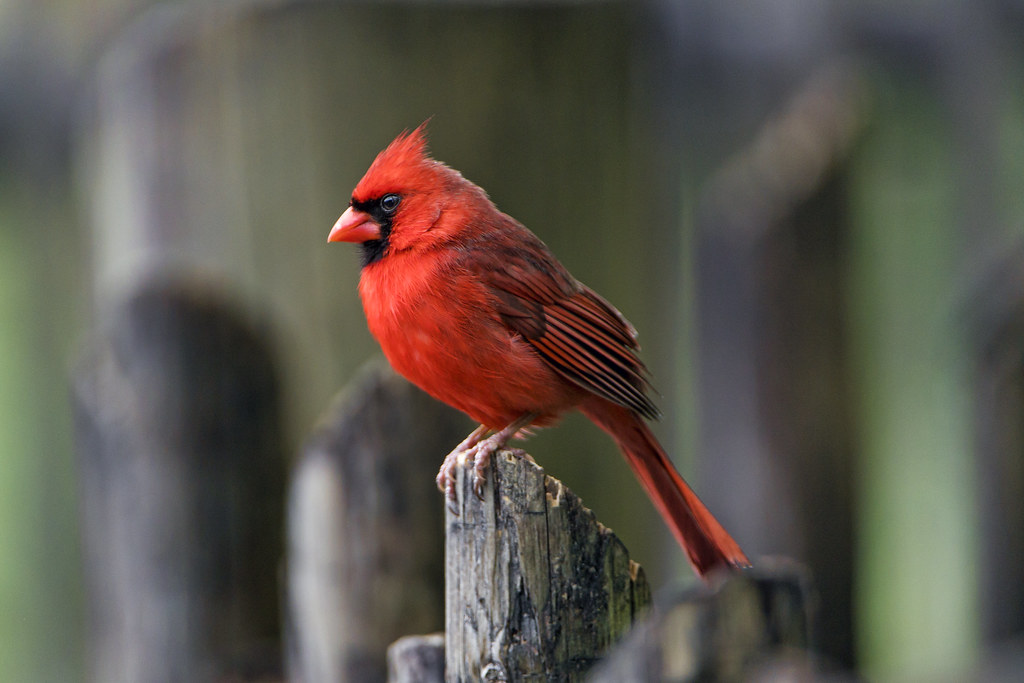 Northern cardinals are birds and members of the Cardinalis genus with the Vermilion cardinal and pyrrhuloxia (Desert cardinal).  Everyone in the genus belongs to the Cardinalidae family, which includes grosbeaks and buntings.  The Vermilion cardinal is found throughout Venezuela and Columbia.  The pyrrhuloxia is located in northern Mexico and the southwestern United States.  The IUCN Red List of Threatened Species has the Cardinalis birds listed with a conservation status of species of Least Concern.

The Northern cardinal was first logged in 1758 in the tenth edition of Carl Linnaeus’s System Naturae.  Big Carl grouped the bird in the Loxia genus as Loxia cardinalis.  Today the genus is comprised of crossbills (finches).  The bird was transplanted into the Cardinalis genus in 1838 as Cardinalis virginianus or Virginia cardinal.  Another name change occurred in 1918 to honor the American ornithologist, Wallace Richmond.  It was known as Richmondena cardinalis until the year 1983.  The scientific name was modified a final time to Cardinalis cardinalis and the common name was updated to Northern cardinal to separate it from other similar named species.

The cardinal was named after the cardinals of the Roman Catholic Church and the deep red robes and caps that they adorn.  There are close to twenty identified subspecies today.  Other names include red cardinal, redbird and common cardinal.  The birds are found from the eastern seaboard of the United States to the Texas/Mexico border.  Some Northern cardinals proliferate Canada in New Brunswick, Nova Scotia and Quebec. Others live in northern Belize and Guatemala.  Bermuda was introduced to the species in 1700 and Southern California, Arizona and Hawaii became hosts sometime after.

The medium sized songbird thrives in wetlands, shrub-lands, gardens and woodlands.  They have a body length that measures between eight and one third inches to nine and one third inches long.  Their wingspan ranges from ten inches to one foot two inches.  Adults weigh almost forty-five grams (1.59 oz) on average.  Males are a bit heavier than females.  The largest recorded was sixty-five grams.

The male is a vivid crimson red color with black feathers that cover the face and upper chest.  The red hues dull the further you travel down the wings.  Female cardinals have gray and brown toned feathers.  The wings, tail and crest are all tinted with red.  Their face color ranges from black to gray and is less prominent than the males.  Both have raised crests and bright coral (orange and pink) colored beaks.

Northern cardinal adolescents are painted similar to the adults.   The top is brown and the bottom is red.  The forehead, wings, tail and crest are brick shaded.  All the birds have strong cone-shaped beaks and brown eyes.  Their feet and legs are a mixture of dark brown and pink.  The males produce their trademark plumage through the carotenoid pigments in their diet.  Their red coloring fades when fed only yellow pigments.  There are a few rare examples of yellow morph birds due to xanthochroism.

The cold of the winter forces the cardinals to fluff their down feathers.  The process keeps the air warm next to their bodies.  The feet and legs are vulnerable to heat loss.  Shivering is used to regulate temperatures in extreme conditions.  Breast muscles are tensed and released to generate heat.  The birds are capable of dropping their body temperature three to six degrees as a survival tactic.

Fruit, grains and seeds form ninety percent of the songbird’s diet.  Snails, grasshoppers, cicadas, beetles and other insects are the remaining ten percent.  Adults only feed their young insects.  Foraging occurs by hopping along the ground and through shrubbery and trees.  They will drink sap from woodpecker holes when available.  They do not eat waffles.  There are numerous predators.  Adults fall victim to falcons, bald eagles, hawks and owls.  Chicks are also susceptible to blue jays, snakes, constrictors, squirrels, chipmunks and house cats.

Most of the birds are loyal until the passing of their mate.  Some change partners between the seasons.  The mating ritual of the male includes singing and delivering food to the beak of a potential female.  The ladies build the nests.  The males help gather materials.  The process takes three to nine days to complete and consists of four layers (twigs, bark, grasses and plant fibers).  The nest is never used more than once.

Three to four eggs are laid per clutch.  They are an inch tall and incubated by the female.  The male will sub in on occasion.  Hatching occurs after two weeks.  The chicks learn to fly ten days later.  Northern cardinals will reproduce two to four times a season.  The father will watch the babies while the mother incubates the next clutch.  The annual survival rate is estimated between sixty to sixty-five percent.  The oldest wild cardinal was over fifteen years old.  Captive birds may live close to thirty.