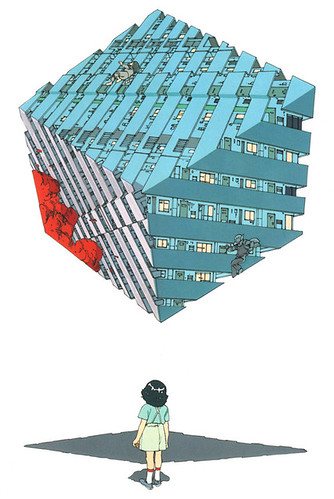 Katsuhiro Otomo (Ōtomo Katsuhiro, 大友 克洋) was born on April 14, 1954 in Tome, Miyagi Prefecture.  He is a Japanese animator, director, screenwriter and manga artist.  Otomo was given the title of Chevalier of the French Ordre des Arts et des Lettres in 2005 and upgraded to Officier in 2014.  The Will Eisner Award Hall of Fame added Katsuhiro to their infamous list in 2012.  He was the fourth manga artist to receive the honor.  The artist has also received the Winsor McCay Award and Grand Prix de la ville d’Angoulême for comics.  The Japanese government presented him the Purple Medal of Honor in 2013.

Otomo was raised in the Tome District of the rural and scenic Tōhoku region of Northeastern Japan.  Katsuhiro was the only boy and surrounded by older and younger sisters.  He spent his childhood reading manga.  His favorite was Astro Boy by Osamu Tezuka.  He began to draw in elementary school.  His skills increased in High School.  He completed his first manga before graduation.

A childhood friend introduced him to an editor at Futabasha Publishers Ltd.  The feedback was positive and an offer was extended if the artist moved to Tokyo after finishing school.  Otomo moved to Tokyo.  His first comic was published on October 4, 1973.  It was a retelling of a short story by Prosper Mérimée titled A Gun Report.  Time passed and the young artist was prolific.  Several shorts were showcased in Weekly Manga Action.

Six years later he started his first science-fiction work, Fireball.  It began publication on January 27, 1979.  It was never completed.  The themes and context marked a stylistic turning point in his career.  Domu: A Child’s Dream or Dōmu was serialized between 1980 and 1981 in Action Deluxe (Futabasha).  The story is set in an apartment complex where a child and old man exchange blows with their extrasensory and physic powers.  Domu was published as a book in 1983 and in English in 1995-1996.  The classic was the first manga to win the  Japanese Science Fiction Nihon SF Taisho Award.

Katsuhiro Otomo illustrated the writer Toshihiko Yahagi’s work Kibun wa mō Sensō in 1981.  It won the Seiun Award for Best Comic in 1982 and was found in Weekly Manga Action.  The pair collaborated on a sequel (Kibun wa mō Sensō 3) in 2019.  His Magnum opus was started in 1982.  It would evolve into the acclaimed worldwide sensation Akira (AKIRA,アキラ).  The manga was published biweekly in Young Magazine (Kodansha) from 1982-1990.  Marvel Comics was the first to pick it up in the United States.

The post-apocalyptic Neo-Tokyo landscape of Akira houses a layered take on modern society.  Alienation and corruption surround the cast.  A group of children with superhuman abilities and young delinquents gravitate towards a climax against a nefarious government.  The adventure received four Eisner Awards, a Harvey Award and the Kodansha Manga Award.  The two thousand pages of Akira created a mainstream interest in manga outside of Japan.  France and the United States developed a particular rabid taste in the subject matter that continues to propagate today.

Otomo began a new full-length series in 2012.  It has been paused and restarted several times over the last decade.  The story is set in Japan’s Meiji period.  The plot is a secret and is intended for older audiences.  In 1987 he wrote and directed a segment of the animated film Neo Tokyo.  He completed an additional two segments for a separate anthology titled Robot Carnival in the same year.  Katsuhiro directed the animated adaption of Aikira in 1988.  It was met with critical success.

Time passed and the artist finished a few scripts and served as the executive producer of Memories (1995).  He ended up directing the segment Cannon Fodder.  Metropolis was released in 2001 and directed by Rintaro.  Otomo was the writer.  He directed the live-action adaptation of Mushishi in 2006 and was attached to the film project Short Peace.  The four shorts were shortlisted at the 85th Academy awards, but failed to be nominated.

Katsuhiro Otomo is married to Yoko Otomo.  They have one son named Shohei Otomo.  Shohei is a rising artist that works with ink, pencils and pens.  The work of Studio Nue and Neon Genesis Evangelion are among his influences  He has inspired several directors and animators over the years.  His art continues to spread today.

“The cartoonist’s work is solitary.”