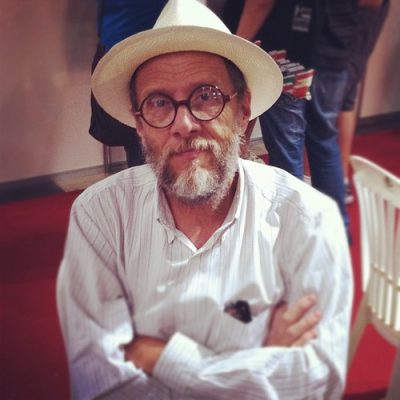 Robert Crumb is a prolific cartoonist.  He was born in Philadelphia, Pennsylvania on August 30, 1943.  R. Crumb is his alias and how he signs his work.  Crumb was raised in a Catholic household in West Philadelphia (similar to the Fresh Prince of Bel Air).  Charles V. Crumb was his dad.  Charles was a combat artist in the Marine Corps.  His mother’s name was Beatrice.  Crumb moved to Milford, Delaware in his teens.  His teachers discouraged his passion for drawing.

American Greetings (Cleveland, Ohio) was Robert’s first employer in 1962.  He drew novelty cards for them.  He unsuccessfully tried to sell comics during his four years with the company.  Harvey Kurtzman published some of his work in the comedy magazine Help! in 1965.  The exposure was short-lived and Crumb returned to American Greetings.  He married Danna Morgan in 1964.  The relationship was tumultuous and the couple divorced in 1978.

Cavalier magazine printed Robert’s Fritz the Cat series (the character was abandoned in 1969).  San Francisco was his destination in 1967.  He melted into the counterculture and produced visionary work for the underground newspapers.  He was an instant success.  Don Donahue (an independent publisher) asked Rob to create a comic book.  Zap Comix was the result.  The comic was first published in early 1968.  Crumb met S. Clay Wilson around the same time.  Wilson’s outlook on life inspired him to reinvent his concept of drawing comics and he settled on an uncensored and unhinged focal point.  This dot, combined with the ethos of San Francisco at the time, provided a platform for Crumb to be himself and produce his purest art.

More than three hundred pages of comics materialized in the underground in the early 1970’s.  The characters Keep on Truckin’, Angelfood McSpade and Mr. Natural were born.  They were popular and increased Crumb’s following.  The comic artist Aline Kominsky married Robert in 1978.  They had a daughter named Sophie in 1981 and collaborated together.  The result was Dirty Laundry (Aline & Bob’s Dirty Laundry).  It documented the Crumb family and their daily antics.  They produced their own avatars known as “The Bunch”.  Aline was an editor for Crumb’s magazine Weirdo in the 1980s.  The publication ended in 1993.

The pair moved to southeastern France in 1991.  The famous documentary Crumb was released in 1994.  Terry Zwigoff (Ghost World) was the director.  The story followed Robert Crumb’s life and explored his artistic style and values.  It won several awards including the Grand Jury Prize Documentary (1995) at the Sundance Film Festival.  Many compendiums were produced after the film.  The most prominent was the seventeen series arc by Fantagraphics Books titled Complete Crumb Comics (1987 – 2005).

Crumb illustrated several album covers.  His most famous ones were The Music Never Stopped: Roots of the Grateful Dead (1995) and Cheap Thrills (Big Brother and the Holding Company).  He drew over a dozen for Blue Goose Records and Yazoo Records from 1974 to 1984.  Robert reworked the Blue Goose logo too.  The Beau Hunks hired him for the art on The Beau Hunks play the original Laurel & Hardy music (1992-93).  Guillaume Veillet outsourced Crumb to complete the cover art for a French analogy of traditional music in 2009.  His talents were loaned to Christopher King (Aimer Et Perdre: To Love And To Lose: Songs, 1917–1934) in 2010.  Crumb’s most recent work can be viewed on Be Kind to a Man When He’s Down by Eden and John’s East River String Band.

Robert’s sardonic elegance and attention to detail are the cornerstones of his style.  His use of psychedelics has nurtured and shaped his output throughout the years. Crumb’s influences include John Stanley, Bud Fisher, Carl Barks, Sidney Smith, Rube Goldberg, Harvey Kurtzman and E. C. Segar (Popeye).

Crumb obtained the Inkpot Award in 1989.  The award is given out annually at the Comic-Con International.  He was nominated for the Harvey Special Award for Humor (1990) and the Angoulême Grand Prix (1999).  The Jewish Museum in New York showcased his work from September 2006 to January 2007.  Chris Ware (Acme Novelty Library and Building Stories), Harvey Kurtzman (Mad), Gary Panter (Pee-wee’s Playhouse), Jack Kriby (X-Men, Iron Man, Hulk, Black Panther, Avengers, Fantastic Four, Captain America, Thor and Ant Man) and Will Eisner (The Spirit) were also featured.  The event was a testament to Robert Crumb’s career and his cementation as America’s father of underground comic(x).

“When I come up against the real world, I just vacillate.”