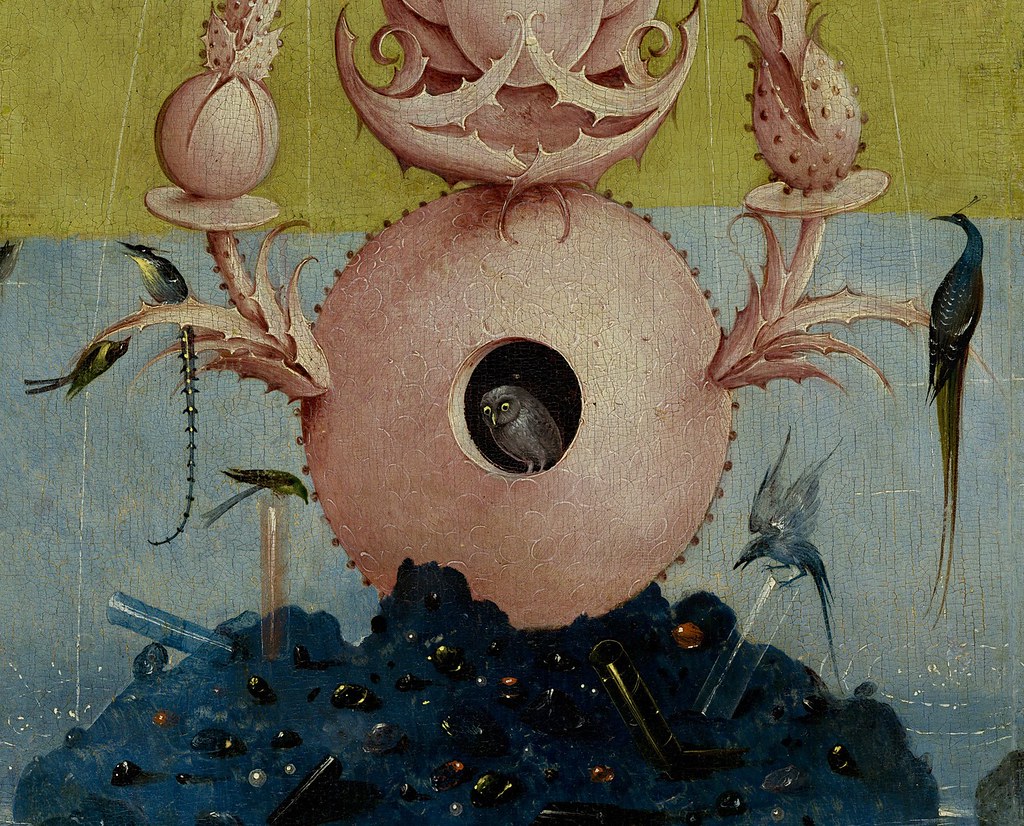 Hieronymus Bosch was a Dutch painter.  He was born in 1450 as Jheronimus van Aken in the Netherlands.  His birth name is equated to the modern name Jerome.  Minimal traces were left behind by the enigmatic artist.  Under thirty paintings have been attributed to him.  Most of his time was spent in his hometown of ‘s-Hertogenbosch.

There are no surviving writings or diaries penned by the master.  Hieronymus’s training and methods are unknown.  His personality is cryptic.  The meaning of his art is left to the viewer.  The 1450 birthdate is general speculation.  His appearance is based on what is assumed to be a self-portrait he drew by hand right before his death.  The birthyear was backdated from his elder presence in the portrait.  He was thought to be in his mid to late sixties.

Grandpa Bosch was a painter named Jan van Aken.  He had five sons and four were painters.  Hieronymus’s father was Anthonius van Aken. He was an artistic adviser and passed away in 1478.  A sister and two brothers and Bosch were left behind.  Papa Bosch or one of the uncles were thought to be Hieronymus’s teacher.

Hieronymus Bosch created over sixteen triptychs throughout his life.  Eight remain unblemished and five are in tatters.  The rest are in internment states of decay.  His work, like a triptych, is broken into three pieces.  Instead of panels the art is placed in three specific time periods.  The early period resides between 1470 and 1485.  The middle period follows and ends in 1500.  The late period concluded at the time of his death.

Thirteen paintings were finished in the late period.  Seven sit in the middle one.  Drawings and artistic explorative pieces fall in the early era.  Bosh preferred to paint against rough surfaces.  His peers applied their brushes against smooth canvases in traditional Flemish style.  The unblemished terrain synergized with the divine subject matter and symbolism.

Hieronymus signed his work.  He was one of the first to do so.  His color pigments were ordinary and limited.  Green and copper glaze was used to create landscapes and foilage.  Yellow and red mixed to form his figures.  Azurite and blues gave birth to the sky.  Oak panels served as the backdrop.

The twentieth century changed the European public’s taste for art.  Bosch’s content became mainstream and created immediate interest in his work.  The Italian Renaissance masters based their creations in the physical world.  Big H attacked the mental construct of the viewer.  His paintings toyed with the nightmares and dreams that float within a person.  Gruesome and lurid creatures crawled amongst the norms.  Some credit him with the creation of monsters.  A tangible transition into the unknown was his venerated vestige; to continue sub-par alliteration… a powerful parlay of paralysis…to wear down the weary.

Other scholars subdue Hieronymus Bosch’s fantasy elements.  They translated his vision as simple orthodox religious beliefs from an evolving age.  The creatures are derivative of the sin of humanity and dogmatic writing.  The surreal was related to morality, but still respected.  A metaphor was presented.  The change was as profound as the first abstract brush stroke or the creation of cubism.  Bosch moved the needle for painters in a way that color and sound did for film.

The Garden of Earthly Delights is the artist’s most famous piece.  It was created over a ten-year period (1495-1505).  The triptych was painted in oil on oak panels.  It’s resting place is in the Museo del Prado in Madrid, Spain.  The work has been there since 1939.  The outer sections are bracketed against the central one.  When closed, an image of the world is displayed during the Third Day of creation.  The day marks the introduction of plant life and before the addition of humans and animals on Earth.  It is composed in gray and green paint.  Psalm 33 is written across the top.

The left panel (Joining of Adam and Eve) portrays a scene from the Garden of Eden.  Adam is shown waking from a deep slumber to the creator holding Eve by her wrist.  God is younger in the first image than the other two.  Eve looks away and Adam gazes in wonder.  Animals frolic throughout the scenery. Some are exotic to Europe and some are not.

The center pane is connected to the left.  A lake serves as the focal point.  Male and female figures are scattered about.  Clothes are a rarity.  A lush garden wraps the image together.  Plants, animals and fruit are commonplace.  Abundance and joy are the allegory.  Waldo is nowhere to be found.  The right panel is filled with everything wrong.  Hell is the setting.  The humans have succumbed to their temptations.  Smoke and fire are littered throughout the surrealist terrain.

Hieronymus Bosch married Aleyt Goyaerts van den Meerveen around 1480.  She was a few years older than him.  They moved to a home that Aleyt inherited.  She came from extreme wealth.  Bosch passed away in 1516.  A funeral service was held at a church.  The rest of the painter’s life is a mystery.