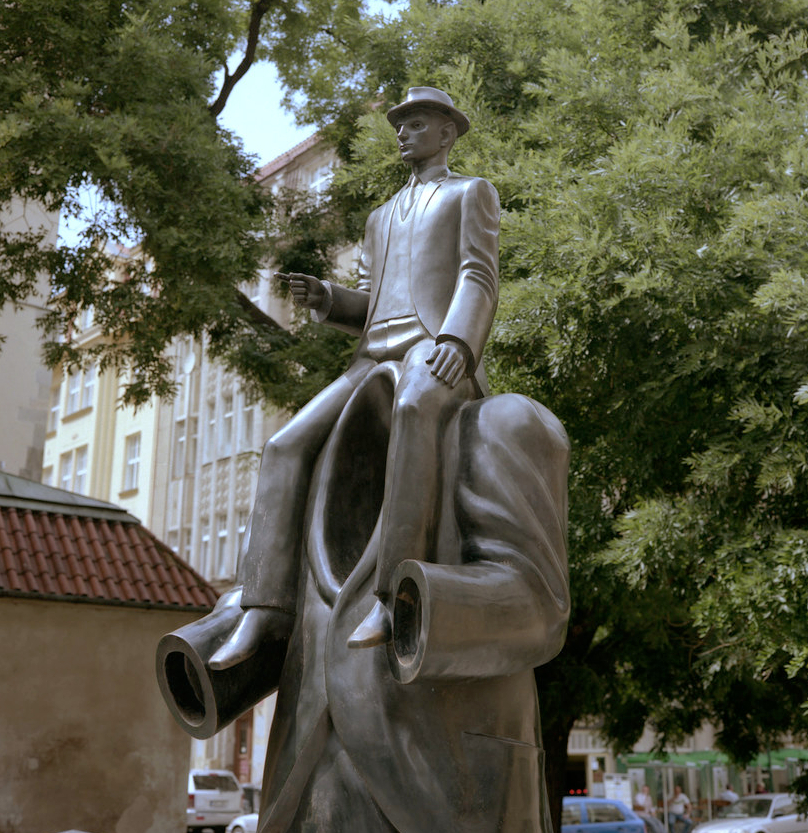 Franz Kafka was an Austrian writer and novelist.  He was born on July, 3 1883 in Prague, which was part of the Austro-Hungarian Empire at the time.  His family was Jewish and part of the middle-class.  Papa Kafka was Hermann.  Mama K was named Julie.  They had six children and spoke German.  Young Franz was the oldest.  His two brothers died in infancy before he was seven.  His three sisters were all victims of the Holocaust during World War II.

Kafka attend the Deutsche Knabenschule elementary school from 1889 to 1893.  His education continued at the Altstädter Deutsches Gymnasium academic secondary school.  Instruction was taught in German, but the author also wrote and spoke in Czech.  He received top marks and completed his Matura exams eight years later.  Franz enrolled into the Deutsche Karl-Ferdinands-Universität of Prague in 1901.

The author majored in chemistry for two weeks and switched to law.  He took additional art history and German studies to supplement his course load.  He was a voracious reader.  The journalist Felix Weltsch, actor Yitzchak Lowy and the writers Oskar Baum, Ludwig Winder and Franz Werfel were among his colleagues. He met the author and composer Max Brod, who was a fellow law student and lifelong friend.  Kafka received his Doctor of Law degree in 1906.

He worked for an insurance company in 1907.  The workload left little time for writing and he resigned in 1908.  Franz joined the Worker’s Accident Insurance Institute for the Kingdom of Bohemia as an assessor soon after.  He was promoted often.  The schedule was more suitable to his literary lifestyle.  In 1911 he opened the first asbestos factory in Prague with Karl Hermann.

He was drafted for military service during World War I in 1915.  His deployment was deferred due to his company providing an essential government service.  The author became a vegetarian.  He tried to join the military later, but was rejected due to his tuberculosis diagnosis of 1917.  The disease was incurable at the time.  He was placed on pension from the illness in 1918 and spent the rest of his life in and out of sanatoriums.

His condition worsened in the Spring of 1924.  His sister took care of him.  The tuberculosis spread and he was committed to a hospital outside of Vienna in April.  The author passed away from starvation on June 3, 1924 at the age of forty.  His inflamed throat made it too painful to eat and parenteral nutrition was yet to be invented.  He was editing A Hunger Artist at the time of his death.  Franz Kafka was unknown during his lifetime.  His fame exploded after his passing.  He is buried in the New Jewish Cemetery in Prague-Žižkov.  He never married.

Kafka wrote most of his works in German.  He never completed a full-length novel and burned ninety percent of them.  His first publication was a collection of eight stories in 1908.  They appeared in the literary journal Hyperion under the title Contemplation.  His breakthrough story The Judgment was written in 1912.  The plot deals with the troubled relationship between a father and son.  The writing was published in Leipzig and dedicated to Miss Felice Bauer.

His magnum opus was published in 1915 and titled The Metamorphosis.  Critics regard the story of a traveling salesman and his transformation into a lurid vermin among the formative works of fiction of the twentieth century.  In the Penal Colony followed.  It was distributed in 1919 and explained with the consequences of an elaborate torture device.  A Hunger Artist was started in 1922 and published posthumously in 1924.

Franz Kafka began writing his first novel in 1912.  The first chapter became the short story The Stoker (1913).  The working title was The Man Who Disappeared or The Missing Man.  Max Brod published it at as Amerika in 1927.  It was one of his more humorous works.  The Trial was started in 1914 and published after death in 1925.  The Castle was created in 1922.  The surreal toned novel was released in 1926.  Thousands of unpublished Kafka papers were discovered after Brod’s passing in 1968.  The documents were left to his secretary.  Some were released and the rest found their way into a legal battle that was settled by the Tel Aviv Family Court in 2012.  They belong to the Israeli National Library today.

“A book must be the axe for the frozen sea within us.”