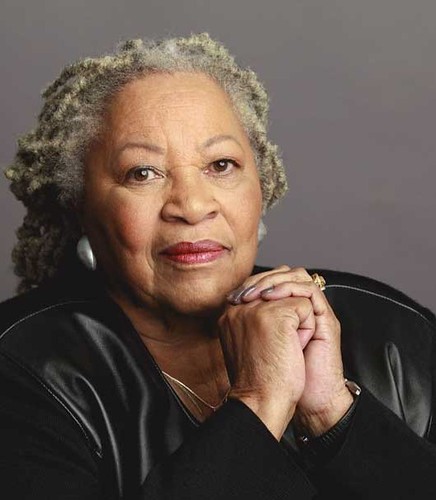 Toni Morrison or Chloe Anthony Wofford Morrison was an American writer.  She was born on February 18, 1931 in Lorain, Ohio.  Her parents were George and Ramah Wofford.  She converted to Catholicism at the age of twelve and adopted the baptismal name Anthony from Anthony of Padua.  This was shortened to Toni, which is immortalized in society today.

She attended Howard University in 1949 and graduated four years later with a Bachelor of Arts in English.  She received her Master of Arts from Cornell University in 1955.  She taught English at Texas Southern University in Houston over the next few years.  The writer transitioned back to her alma mater Howard and continued to teach from 1957 to 1964.  She dated Harold Morrison during this time.  The couple married in 1958.  Toni Morrison divorced Harold in 1964.  She was pregnant with her second son.

Morrison worked as an editor for Random House in Syracuse, New York in 1965.  She was promoted and joined the New York division as a senior editor in fiction two years later.  She was involved in bringing several contemporary novels to the marketplace.  Time passed.  Toni began writing her first novel during the early hours of the day.  The Bluest Eye (1970) was published when she was thirty-nine.  It was well received by the critics and a slow seller.

Her second novel was titled Sula and released in 1973.  It was nominated for the National Book Award.  Song of Solomon (1977) followed.  The story details the life of Macon “Milkman” Dead III in the state of Michigan.  It was added to Oprah Winfrey’s popular book club and won the National Book Critics Circle Award.  Tar Baby was finished and published in 1981.  Toni Morrison left publishing to focus on writing fulltime in 1983.  She continued to teach at Rutgers University’s New Brunswick and at the State University of New York.  Her prose developed.

Morrison’s magnum opus was circulated in 1987.  Beloved was an instant success and stayed on the bestseller list for twenty-five weeks.  The setting occurred after the American Civil War and details the story of a family that is haunted within their own home.  The novel was ignored by the National Book Critics Circle Award and National Book Award.  The writing was acknowledged a year later when it received the Pulitzer Prize for Fiction and Anisfield-Wolf Book Award.  The story spawned a trilogy.  Jazz (1992) was the sequel. She was awarded the Nobel Prize in Literature.  Time passed.  The accolades continued.  Paradise was published in 1997.  The trilogy concluded.  Time magazine placed Toni Morrison on its cover.

The author pursued various forms of literature.  Love was composed and distributed by Alfred A. Knopf in 2003.  It received favorable reviews.  The New York Times Book Review placed Beloved in the top position on their list of the best American fiction of the previous quarter century.  A Mercy was published in 2008 and was set in the Virginia colonies during the late sixteen hundreds.  Morrison held the Robert F. Goheen Chair in the Humanities at Princeton University until 2006.  The university renamed a building to Morrison Hall in her honor several years later.

She coauthored children’s books with her son until his passing in 2010.  Peter Sellars and Toni collaborated on a play based on William Shakespeare’s Othello.  It premiered in Vienna in 2011.  Her novel Home was dedicated to her son and released in 2012.  The plot follows a Korean war veteran in the United States.  God Help the Child was her last book and printed in 2015.  The story revolves around an executive in the fashion industry.

Toni Morrison died from pneumonia complications on August 5, 2019 at the Montefiore Medical Center in The Bronx, New York City.  She was eighty-eight. A memorial was held in the Morningside Heights neighborhood of Manhattan on November 21.  The musician David Murray performed a tribute.  Her eulogy included words from Angela Davis, Oprah Winfrey, Fran Lebowitz, David Remnick and others.

The National Memorial for Peace and Justice in Montgomery, Alabama has a mural of Toni’s writing.  Princeton University is the home of the Toni Morrison Papers.  They are held by the Department of Rare Books and Special Collections.  Her decision to store them with Princeton over Howard has since generated mild controversy.  Toni Morrison Day was introduced in 2019 by her hometown of Lorain, Ohio.  The legislation progressed through the Ohio Government.  The holiday was elevated to the state level and signed into law in 2020.  Her words live on.

“If you want to fly, you have to give up the things that weigh you down.”