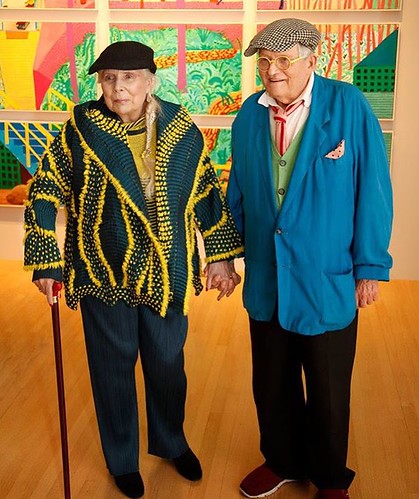 David Hockney is a British painter and photographer.  He was born on July 9, 1937 in Bradford, West Riding of Yorkshire, England. It is unclear if he enjoys hockey. His parents were Kenneth and Laura Hockney.  They had four other siblings.  David was educated at Bradford Grammar School and Bradford College of Art.  He finished his studies at the Royal College of Art in London.

The Young Contemporaries exhibit in London featured Peter Blake and David Hockney during their time at the Royal College of Art.  The concluding message was that British pop art had arrived.  Hockney was grouped into the movement, but had expressionist tendencies.  His premature style was similar to Francis Bacon.

In 1962, David refused to complete a life drawing of a female model and write an essay for his final exam.  The artwork and prose were graduation requirements.  He painted Life Painting for a Diploma instead of the model and refused to craft the essay.  His rebuttal was that he should be judged on his art alone.  Hockney’s rising fame and irrefutable talent won over the instructors and he graduated.  He taught at the Maidstone College of Art (Kent institute of Art & Design) for a brief time afterwards.

The artist relocated to Los Angeles in 1964.  Today he rotates between his residences in London and California.  Printmaking, portraits and photocollages have been consistent mediums throughout David Hockney’s career.  The Three P’s.  Double and single portraits were the cornerstone of his output starting in the late 1960’s.  He often painted the same subject multiple times.  Employees, family members and other artists were brought to life by his brush with photorealistic accuracy.  The most common was none other than the artist himself.  Over three hundred self-portraits have been created to date.

A camera lucida was used at the turn of the century.  The artist aid provides an optical superimposition of a subject that is projected onto the drawing surface.  The double exposure allows for an accurate duplication of the chosen perspective.  Hockney created two hundred pictures using the antique lens.  The Quantel Paintbox was used to draw in the mid 1980’s.  The computer program let the painter sketch directly to a computer screen.  David’s sister helped him transform these early experiments with Photoshop in 2003.  The iPhone and iPad are modern tools that he uses today.  Hockney has designed stained glass windows for Westminster Abbey using the technology.

Photo-collages created from Polaroid and commercial photographs were used to make composite images.  David started the experiment in 1980.  The end result was Cubism inspired renderings.  Over the years the limitations of the medium’s perspective became apparent and he returned to painting.  Printmaking and lithographs were made up until the 1970’s.  His best pieces have been featured in several collaborative works.

Hockney artwork has been shown in over four hundred solo and five hundred group exhibitions.  His first lone show was held at Kasmin Limited in 1963.  He was twenty-six years old.  Several of his collections have traveled to numerous continents and have been shown at The Met and the Tate Gallery.  One hundred fifty pieces created over five decades were displayed at the National Portrait Gallery in London in 2006.  The feature was one of the gallery’s most successful attractions.  David Hockney: Just Nature landed in Kunsthalle Würth (Schwäbisch Hall, Germany) in 2009.  Over one hundred thousand visitors traveled to the showcase.

Six hundred thousand people witnessed David Hockney: A Bigger Picture in under three months at the beginning of 2012.  The hundreds of paintings ensconced the Royal Academy before the exhibit traveled to the Guggenheim Museum in Bilbao, Spain.  The show’s final destination was at the Ludwig Museum in Cologne, Germany at the start of 2013.  The Tate Britain, the Pompidou Centre and The Metropolitan Museum of Art took turns hosting David Hockney.  The exhibition was put together for the artist’s eightieth birthday in 2017.  Four thousand visitors rolled in each day at the Tate and five thousand per day traversed the Pairs location.

In 2006, Hockney’s The Splash (1966) sold for two million six hundred thousand pounds.  The pop art painting was put up at auction in 2020 and went for over twenty-three million pounds.  The National Gallery of Australia purchased A Bigger Grand Canyon (1988) for four million six hundred thousand dollars.  Sixty canvases make up the colorful masterpiece that are combined to make a single, brilliant picture.  2008 marked his most lucrative sale of almost eight million dollars for Beverly Hills Housewife (1967).  Woodgate Woods (2006) broke the record at nine million four hundred thousand pounds in 2016.

Two years later Piscine de Medianoche (Paper Pool 30) (1978) set a new high at close to twelve million dollars.  It made almost double the amount during the same auction.  On November 15, 2018 Portrait of an Artist (Pool with Two Figures) (1972) sold for ninety million three hundred thousand dollars at a Christie’s auction.  The purchase set the record for most expensive artwork sold of a living artist.  The previous holder was Jeff Koons for his Balloon Dog (Orange) in 2013.  Jeff’s piece was bought for almost sixty million.  The original owner of the Hockney painting bought it for twenty thousand dollars in 1972.  David Hockney continues to create today at the age of eighty-four.

“The moment you cheat for the sake of beauty, you know you’re an artist.”