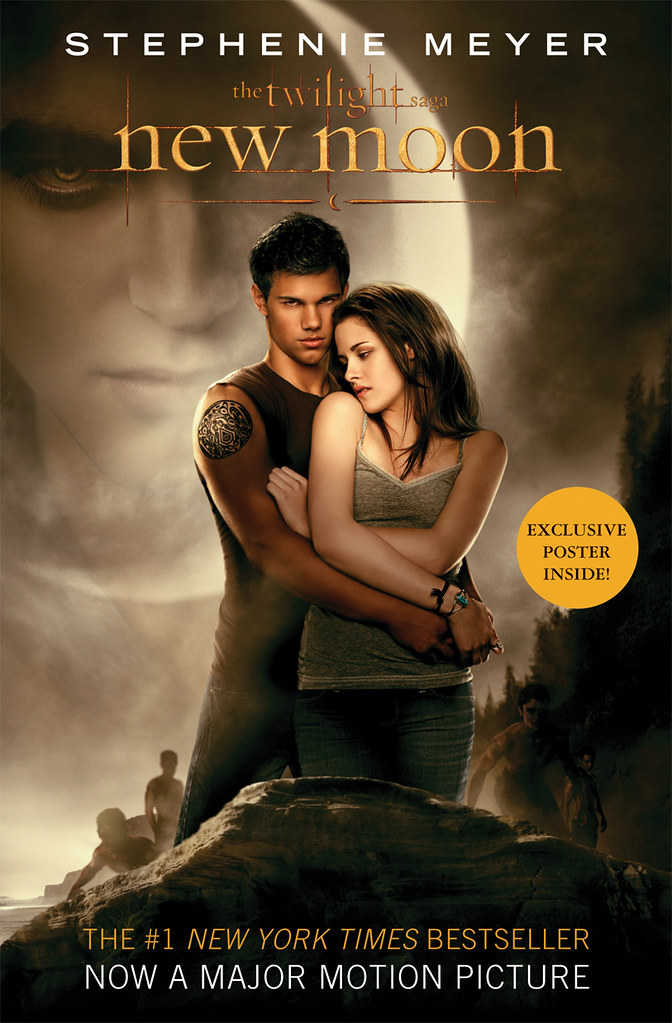 New Moon is the second book in the Twilight series.  It was written by Stephenie Meyer and published by Little, Brown and Company in 2006.  The paperback was the best-selling children’s novel in 2008.  Over five million copies were sold.  New Moon picks up where Twilight left off and follows the ever-evolving supernatural romance between Edward Cullen and Bella Swan.

Bella is in a deep sleep.  Rapid eye movement (REM) dreams kick in and she has a vision.  Bella is an old lady and Edward is still a youngster.  The dreamer awakes on her eighteenth birthday and is now a year older than Edward.  Big Ed is actually over one hundred years old, but he is a vampire and forever seventeen.  Bella’s day progresses and she attends a birthday party at the Cullen’s.

The time for presents arrives and the birthday girl is ecstatic.  She loves gifts.  Presents are the best.  She soaks in the festivities and thinks that there is no time like the presents.  Bella eviscerates the wrapping paper on one of her gifts.  She cuts her finger on the paper during her haste.  Some blood drops out of the cut.  Edward’s brother Jasper is overwhelmed with bloodlust and attacks her before the wound has a chance to coagulate.  Bella didn’t wish for progressive healing capabilities.  She wished for a big smooch from Big Ed when she blew out the eighteen cake candles.  Bella did not get that kiss, but Edward saves her from Jasper.  Papa Cullen stiches her up.

The fallout of the party is negative.  Edward breaks up with Bella and urges her to move on.  He promises to stay out of her life and says he does not love her anymore.  Edward leaves and the Cullens move out of town.  Bella pursues her vampire boyfriend, but loses him in the woods.  Ed vanishes.

Depression sets in and Bella is catatonic for several months.  Her father encourages her to live her life.  She agrees and goes to see a movie with Jessica.  The monotonous activity does not alleviate her mind of Edward.  Her serotonin and adrenaline are depleting, so she buys two old motorcycles.  Bella takes them to her friend Jacob Black and asks him to fix them.  He agrees under the condition that he gets to keep one.  A deal is forged and she leaves his house.

Bella is starting to feel normal after spending more time with Jacob.  The new interactions help, but she still misses her Edward.  Jacob completes the motorcycle repairs and they go for a drive.  They spot some cliff divers during the excursion.  Bella is attracted to the danger and asks Jacob to take her sometime.  He says he will.  The heroine crashes her bike and injures her head.  She spends some time hospitalized.  Jacob suggests that they take a motorcycle break.  They both go hiking instead.

Jacob and Bella go to the movies with Mike.  J.B.M. head into the dark theater.  Mike gets sick and they leave before the film ends.  Bella gets sick.  Jacob does not.  A different illness afflicts the handsome lad.  Bella is not allowed to visit.  A Jacob free week rolls by and Bella goes hiking alone.  She runs into a vampire from the last book.  Laurent explains that he wants to kill her.  Bella just wants to let bygones be bygones and live under a new moon.  A pack of giant wolves chase off the bloodsucker.  Bella goes home.

The Jacob void in Bella’s life causes her to wait for him in his driveway.  They cross paths and share some words.  He has short hair and huge muscles.  Did your hair turn into muscles?  Perhaps through a hair follicle osmosis?  Jacob says, woman that is preposterous.  They part ways.  Jacob appears in Bella’s bedroom window in the dead of night.  She says, young man…this is preposterous.  Jacob sighs and says if you remember the Quileute legends you will get your answer.  Bella dreams about werewolves and new moons (full moons).

Bella visits Jacob and accuses him of murder.  He explains that werewolves protect people from vampires and they killed Laurent.  She is relieved, but learns that Victoria is after her now.  There is a werewolf meeting and a scuffle.  Time passes and the pair decides to go cliff diving.  Jacob cancels due to Victoria’s appearance.  Bella goes anyways.  She jumps and the current pulls her away from the shore.  Jacob saves her with his muscular biceps.

Edward has a vision and thinks that Bella committed suicide instead of seeking a cliff diving adrenaline fix.  He flies to Italy to end his life at the hands of the Volturi.  Alice and Bella fly to Italy to stop him.  New Moon takes a morbid turn.

The Volturi value Edward’s powers and refuse to oblige with his death wish.  He decides to reveal his identity to the good people inhabiting the streets of Italy in order to force the Volturi’s hand.  Alice and Bella arrive just in time.  Edward thinks he is in heaven.  Bella convinces him that he is in the present (not the presents).  They move to escape, but the Volturi scoop them up.

The top dogs of the Volturi interrogate them.  They try to read her mind and torture Bella with their powers.  They have no effect.  The Volturi agree to let them go under one condition.  Edward must turn her into a Vampire.  Everyone returns home.  Bella’s father is disappointed with her escapades.  He forbids her from seeing Edward, but decides it’s pointless.  Edward re-confesses his love to her.  He promises to never leave her again.

The Cullen family votes to turn Bella into a vampire.  Edward and Rosalie are against it.  Bella returns home past her curfew.  Jacob gives her a lecture.  Her father does too.  Bella is unfazed.  Edward is back in her life and she has a feeling that she can conquer anything.  Her dad grounds her.  New Moon ends.