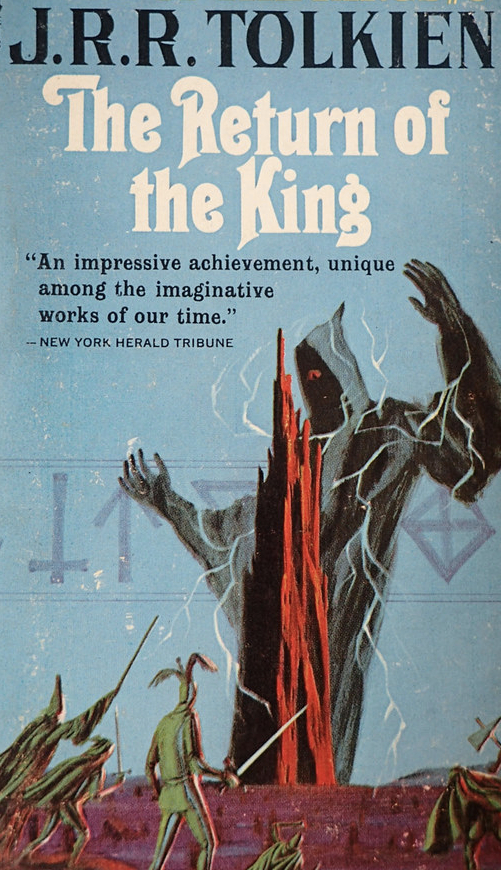 The Return of the King is the last volume in The Lord of the Rings series.  It was written by J.R.R. Tolkien and published in 1955.  It concludes the epic story that started in The Fellowship of the Ring and The Two Towers.  Everyone is tired, but there is work to be done.  Battles are raging and the Ring is yet to be destroyed.  The flawless golden circle needs to be demolished for good to prevail.  The Return of the King begins.

Pippin and Gandalf head to the main city of Gondor, Minas Tirith.  Pippin makes some hilarious jokes, but the wizard reminds the hobbit that this is not a joking matter.  Pippin pouts and they arrive at the white stone city.  They head up to the main court and pass a withered white tree.  Pippin whispers a joke into the dead branches, but the explosive growth of foliage in his head does not take place.  Pippin keeps pouting.

The pair reach Denethor.  He is the man in charge and also pouting.  Denethor heard about his son Boromir’s death.  Pippin offers his service and the king accepts.  Denethor quizzes Pippin on his journeys and gets angry with Gandalf.  The white wizard expresses his good intentions.  Darkness rolls in and Gandalf tells Pippin that evil is brewing.

Aragorn notifies Legolas, Gimli and Merry that he needs to take a more dangerous route to Minas Tirith.  He is going to use the Paths of the Dead.  The elf and dwarf are shocked.  They know the history and that anyone who enters does not return.  Aragorn tells them to chillout, he is the proper heir of Elendil after all.  They say true, true and the trio heads out.  Merry stays with Théoden who takes a safer path.

The boys enter a mountain and Gimli is spooked when he sees ghosts.  Gimli has a great beard, but he scares easily.  Aragorn speaks to the dead and they rally under his banner when he reveals a black flag and announces himself as the heir of Isildur’s kingdom.  The dead guys and the good guys ride out of the mountain towards Anduin.

Théoden goes back to Rohan and gathers his men.  Six thousand riders assemble for Minas Tirith.  Darkness greets the morning and Théoden asks Merry to stay.  He tells the hobbit he would get in the way.  Merry is dejected and worries about his friends.  A slender rider named Dernhelm offers to take him and he agrees.  Everyone gallops towards Minas Tirith.

Pippin adorns his new Gondor uniform and a bunch of Nazgûl swoop over the outer gates.  A group of men flee towards the castle on horseback.  A horn blasts sweet, sweet music into the air.  The musician is Denethor’s other son Faramir.  Death is about to set over the brave men before Gandalf saves them.  Faramir talks to his papa and he yells at him.  Papa D likes Boromir better.  Faramir talks about his beautiful horn music, but Dad is not a connoisseur of the arts.  Faramir is sad and time passes.

Merry stays hidden amongst the numerous riders.  All of the routes to Minas Tirith are blocked.  The Wild Men of the Woods cross paths with the riders and decide to show them an alternative way.  The good guys take the route and find a few dead bodies.  One of the corpses is a messenger from Gondor.  The riders go into battle and kill some Orcs.  They prepare to fight the Southrons next.

Rohan is winning and The Lord of the Nazgûl appears.  Rohan is no longer winning.  Everyone scatters.  Dernhelm loses his horse and squares off with the Black Captain.  Dernhelm lowers his hood and reveals that he is not a he, but Éowyn the Lady of Rohan.  She strikes the captain and he breaks her arm.  Merry sneaks up and stabs his leg.  Èowyn uses her last bit of strength and finishes him off.  Merry is injured.

The victory is short lived and King Théoden dies.  Allies of Mordor flood into Gondor and black ships materialize on the Anduin river.  The situation is dire and the walls are closing in.  Aragorn appears on the ships and turns the tide of battle.  The evil armies are defeated and everyone heads to the city.  The return of the king.

Somewhere in the castle Denethor loses his mind and lights himself on fire.  He tries to ignite Faramir with him.  Gandalf saves Faramir, but Denethor dies.  Pippen links up with Merry and notices his injury.  They both head over to the Houses of Healing to tend to his wound.  Aragorn revives Faramir.  The fellowship swap stories and Gandalf decides they should move towards the Black Gate of Mordor.  He explains that if Frodo fails his mission, all will be lost.  An assault would buy him time.

Seven thousand men march towards Mordor.  They defeat some orcs on the way.  They arrive at the gate and demand to speak to Sauron.  The Lieutenant of the Dark Tower appears with some soldiers. He taunts them with items that were seized off of Sam and Frodo.  He claims the hobbit’s lives will be spared if they agree to his terms.  The terms are short and sweet and include submitting to Mordor.  Gandalf says no shot.  The Lieutenant retreats and a large army pours out of the gate and surrounds them.

[…]Sam puts on the Ring and succumbs to its power.  He fights it and takes the precious off.  He battles a few orcs and saves a malnourished Frodo.  They put on some orc armor and Sam gives Frodo the Ring.  The buddies head out into Mordor.  They reach a bridge and a group of orcs appear.  They jump over the edge and move in the valley below Mount Doom.  Their provisions are low, but they press on.  The weight of the ring increases around Frodo’s neck with each step.

Several days pass and Sam carries Frodo on his back.  The hobbits reach the foot of the mountain.  They are both in tremendous pain and progress to the top.  The people’s champ Gollum appears and Frodo puts on the ring.  Big G attacks Frodo and bites of his finger to get to the Ring.  Nine digits Fordo screams in pain, but Gollum falls into the depths and the Ring is destroyed.

Mount Doom explodes and the armies of Mordor are defeated.  Gandalf hops on a giant eagle and saves the hobbits before the landscape claims their lives.  Time passes.  Everyone returns to the lands of Gondor and celebrates.  Aragorn is crowned the rightful ruler (the return of the king).  Frodo visits Bilbo in Rivendell and he gives him some unfinished books.  The boys go back to the Shire and square off with Saruman.  They prevail.  Gandalf, Frodo and Bilbo sail off to the Undying Lands and everyone lives happily ever after.  The Return of the King ends.

4 comments on “The Return of the King”