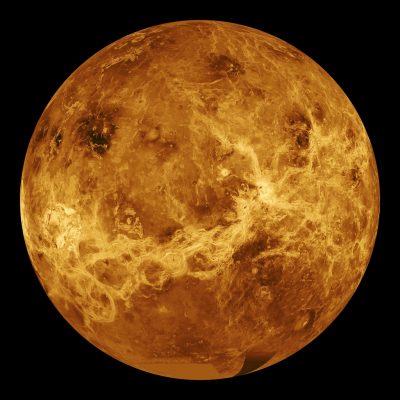 Venus can be seen from Earth without a telescope.  All you need are two eyeballs.  One will work as well.  Sometimes it is visible during the day.  It’s the second planet in the Solar System after Mercury and the second brightest natural object in the sky.  The Moon is the first.  The name is derived from the Roman goddess Venus.  She represents desire, beauty, fertility, prosperity and love.  Her Greek counterpart is Aphrodite and her children include Aeneas and Cupid.  One of the greatest female tennis professionals of all time shares a name with the planet (Venus Williams).  Her sister is pretty good too.

The surface of Venus was charted by the Magellan spacecraft in 1990 and 1991.  It found that sulfur was present in the atmosphere and evidence of volcanic activity.  Almost eighty percent of the planet is covered with volcanic plains.  The other twenty is made up of two mountainous continents.  The northern one is called Ishtar Terra and the other, in the south, is Aphrodite Terra.  Maxwell Montes is the tallest mountain range and found in Ishtar.  Its highest peak is seven miles tall.  Ishtar Terra is the size of Australia and Aphrodite Terra is near the mass of South America.

There are little to no impact craters on Venus and a lack of lava flow in the calderas (craters formed by a volcanic explosion).  The missing lava is a scientific mystery.  The low crater count reveals that the surface is young in comparison to the other three terrestrial planets.  It is estimated to be six hundred to three hundred million years old.  Pancake shaped lava domes are indigenous to Venus and scattered throughout the surface.  They are up to one hundred times larger than the volcanic domes on Earth.

There are one hundred and sixty-seven volcanoes over sixty miles wide found on the planet.  The Island of Hawaiʻi (Big Island) is the sole example of a volcanic complex of this size.  The cause is simple.  Venus has a much older surface compared to Earth’s shifting tectonic plates.  They are a mere one hundred million years old and have not had enough time to do tectonic things.  Fluctuating Sulfur dioxide levels in the atmosphere indicate the presence of active volcanoes on Venus.  The level’s concentration dropped by a factor of 10 (ten times) in the late 1970s and 1980s.  They peaked in 2006 and later deteriorated again by a multiple of 10.  The European Space Agency (ESA) orbiter, Venus Express (VEX), documented the first concrete examples of volcanism.  It spotted four hot spots near Ganis Chasma (a rift zone) that were caused by the release of fresh lava.

Earth and Venus have an analogous physique and mass.  They are considered planetary siblings.  Venus’s waistline is about four hundred miles less than Earth and eighty percent of her brother’s weight.  Their atmospheres are much different.  Venus is over ninety-five percent carbon dioxide.  The rest is nitrogen.  They both have a core, mantle and crust, but there is no knowledge of Venusian tectonic plates.  Its interior has about a quarter less internal pressure than Earth.  Other internal pressure exists, such as dealing with the lack of her ability to sustain human life like her big brother.

The density of Venus’s atmosphere is ninety-three times that of Earth’s.  Its surface pressure is close to ninety-two times.  The carbon dioxide that fills the air creates the fiercest greenhouse effect in the Solar System.  This heats the planet up hotter than the surface of Mercury.  Temperatures reach up to 865 degrees Fahrenheit, even though it is twice the distance from the Sun as the first planet.  Any existence of water was destroyed by the greenhouse effect.  This happened over the course of several billion years.

Venus has slow moving winds and no seasons.  Regardless of the speed, the thick atmosphere generates significant force that makes it difficult for a human to walk through.  Debris and dust swirl about and pose an equal threat to the lack of oxygen and torrid climate.  The entire planet is isothermal (system temperature remains constant).  The poles and equator are the same temperature as the hemispheres.  Venus has almost no axial tilt (three percent) and that helps maintain the symmetry.

Venus is the brightest white point after the Sun.  Midday spotting is possible and it is more visible than the Sun under certain circumstances.  It can be observed with the naked eye and is best viewed during the crescent phase.  When it orbits the Sun, it exhibits stages like the Moon.  It becomes a full disc when it’s on the opposite side of the Sun.  It takes the form of a slim crescent when it is on the fringes of Earth and the Sun.  The quarter phase is when Venus is furthest from the Sun.  The largest is when inferior conjunction occurs as it sits in the middle of the Sun and brother Earth.

It takes about two hundred and twenty-five days for Venus to complete its orbit around the Sun.  Its average distance is 0.72 AU away from big “S”.  The orbit is the most circular in the entire Solar System with an eccentricity under 0.01.  A solar day takes 117 Earth days and 1.92 of them equal one Venusian year.  There are numerous trojan asteroids, but no natural satellites.

The prospect of life on Venus has decreased over the years.  Some have suggested that microorganisms could exist in the upper layers of its atmosphere.  Harold J. Morowitz and Carl Sagan speculated that small objects found in Venus’s clouds could be bacteria in 1967.  In 2019, astronomers found patterns of albedo (reflection and diffusion of solar radiation) changes in the atmosphere.  The light absorbers could be microorganisms or chemical based.  The changes mimicked bacteria in Earth’s clouds.  Phosphine gas was spotted thirty miles above the surface in 2020.  The gas cannot be generated from any known chemical process on Venus.  This would mean that some kind of organism would have had to create it.  The detection threshold was questionable, but the discussion was thrilling.  The mysteries of Venus are sure to thicken in the coming years.