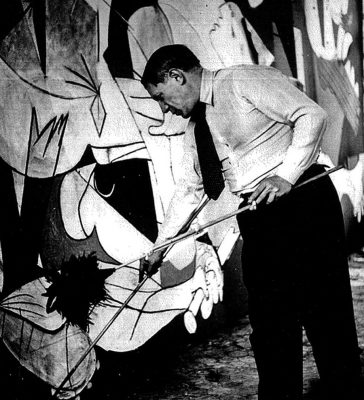 Pablo Ruiz Picasso was born on October 25, 1881 in Andalusia (southern Spain).  His father was the painter José Ruiz y Blasco (1838 – 1913).  He liked to paint birds and nature.  José was a professor and a museum curator too.  María Picasso y López was Pablo’s mother.  She raised the young savant and witnessed his first words, “pencil”.  Little Picasso was destined to draw.  Papa Picasso started tutoring his son in classical art when he was seven.  He was a natural.

Everyone moved to A Coruña (a city in northern Spain) in 1891.  Pablo’s father worked at the School of Fine Arts.  They stayed for close to four years.  Picasso continued to draw and study.  José observed his son painting over a sketch he made of a pigeon.  He was in awe.  Pablo’s doodle surpassed his technique in every way.  He vowed to give up painting and nurture his son’s talent.

Pablo Picasso’s sister passed away in 1895.  The event traumatized the young boy and the family moved again.  They settled in Barcelona and José took a post at the Fine Arts School in the city.  Pablo continued to refine his craft and his father persuaded the school to allow his son to take an entrance exam for their advanced class.  It was a month-long process that Picasso completed in a week.  He was admitted at thirteen years old.  Little “P” lived in a small room in the depths of the city.  Big “P” paid the bills.  He attended Real Academia de Bellas Artes de San Fernando in Madrid when he turned sixteen.  The pace and structure did not synchronize with his ambition.  Picasso stopped going.

He met the poet and journalist Max Jacob in 1900 in Paris.  They shared an apartment in the city.  Money was tight and the room was cold.  Picasso had to burn several of his paintings in order to keep them warm.  Pablo transitioned back to Madrid in 1901.  He created the magazine Arte Joven (Young Art) with his friend and anarchist Francisco de Asís Soler.  Francisco commissioned Picasso to illustrate its five issues.

Picasso’s Blue Period lasted from 1901 to 1904.  His paintings were shaded in monochromatic blue-green and blue tones.  The works were created in Barcelona and Paris and are some of his most recognizable pieces.  A serious tone permeates the paint and the subjects (often the poor and disenfranchised).  Pablo painted several portraits of his friend Carles Casagemas after his death.  The most famous one, La Vie (1903), hangs in the Cleveland Museum of Art.  The Old Guitarist (1903) is in the Chicago Art Institute and depicts a blind man bent over a guitar.  X-rays of the masterpiece revealed that there are three other figures hidden beneath the painting.  Others from the Blue Period include The Portrait of Suzanne Bloch (1904) in the São Paulo Museum of Art and The Blindman’s Meal (1903) in the Metropolitan Museum of Art.

Pablo adopted a lighter tone and style with his Rose Period from 1904 – 1906.  A pink and orange palette was used in the paintings.   The subjects were often acrobats and members of the circus.  Au Lapin Agile (1905) and Portrait of Gertrude Stein (1906) are from this period and they are both displayed in the Metropolitan Museum of Art.  Picasso started to gain a following and the German art historian Daniel-Henry Kahnweiler added him to his Pairs gallery in 1907.

In 1907 to 1909 Pablo Picasso entered his African Period.  His style was derived from Iberian sculpture and early traces of cubism are present.  His painting Les Demoiselles d’Avignon (1907) was filled with malformed faces and the critical response was pure shock.  He did not display it publicly until 1916 and it is a centerpiece in the Museum of Modern Art (New York) today.  Analytic Cubism was developed from 1909 – 1912 with neutral and brown coloring.  The style was developed with Georges Braque when the pair examined their artwork in terms of shapes.

Synthetic cubism reigned from 1912 to 1919.  Pablo explored minimalism and geometry.  The result was Crystal Cubism.  He was now famous and unrivaled.  Portrait of Daniel-Henry Kahnweiler (1910) and Still Life with a Bottle of Rum (1911) are from this period.  A decade of surrealism and neoclassicism followed from 1919 to 1929.  Picasso’s style continued to evolve and flourish.  Seated Nude Drying her Foot (1921) was the apex of this period and is displayed in Berlin at the Berggruen Museum.

The minotaur was a main subject in the 1930’s and resulted in Pablo Picasso’s magnum opus.  It was titled Guernica (1937) and can be viewed in the Museo Reina Sofía in Madrid, Spain.  The painting is his delineation of the bombing of Guernica from the Spanish Civil War.  The Second World War transpired and Picasso remained in Paris.  He was often harassed by the Gestapo and his style was misaligned with their viewpoints.  He had no exhibitions during this time and took up poetry.  The war ended and he moved to the medium of sculpture.  The Chicago Picasso was erected in 1967 and is a focal point of Chicago.  It was commissioned by the architects of the Richard J. Daley Center in 1963.  The sculpture is fifty feet tall and sits in the Daley Plaza.  He rejected the $100,000 fee and made it for the people.  The shape is ambiguous and can be interpreted as a woman, horse, bird or simple abstraction.  It is a popular tourist destination today.  Pablo continued to work until his death on April 8, 1973 at the age of 91.  He passed away in Mougins, France from heart failure.

“Art is the lie that enables us to realize the truth.”