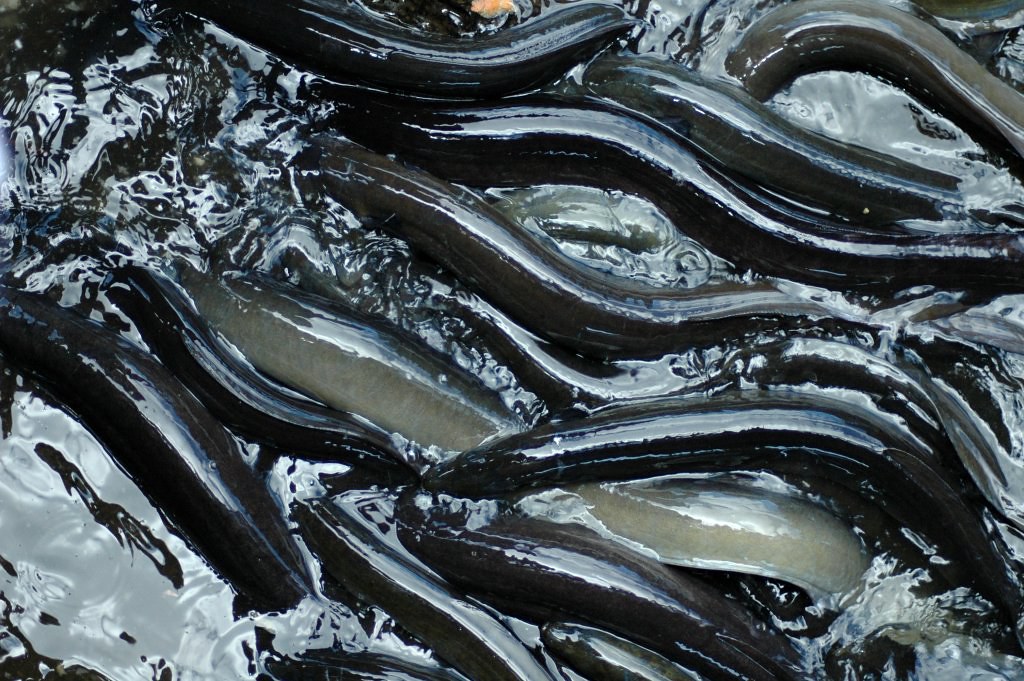 Freshwater eels are members of the Anguillidae family and Anguilla genus.  The ray-finned fish roam the fresh waters of over one hundred fifty countries worldwide.  Their life is somewhat of a mystery and several populations are threatened.  Some species are an important food fish.  The threatened ones should not be eaten.

The Japanese eel, Australian long-finned, short-finned and longfin eels are vital species in the eel food industry.  Korea, Japan and Taiwan historically have had the highest output of eel aquaculture.  China is the largest producer today.  In Japan the word for freshwater eel is unagi.  It is a common ingredient in Japanese cooking and prepared by a method called kabayaki.  The process begins by splitting the fish down the middle, clearing the entrails and butterflying the eel.  It concludes by creating fillets that are dipped in a sweet soy sauce and cooked on a grill.  Saltwater eels are called anago.  They are eaten as sushi or tempura.

Italian scientists discovered Nardoechelys robinsi in the Santonian-Campanian Calcari di Melissano fossil bed in 2002.  The eighty three million year old find was branded as the ancestor to all living eels.  The first freshwater eel fossil was located in Messel, Germany.  Anguilla ignota is around forty million years old and from the mid-Eocene epoch.  Volcanic activity during the time period formed the first freshwater maar (crater) lakes.

A big pointed head and tube-shaped body define the silhouette of the freshwater eel.  Strong pectoral fins and a developed pair of eyes are used to wade through shallow water and river beds.  Delicate and soft scales are embedded in their flesh.  Small, coarse teeth line their jaw and vomer bone.

Female eels are larger and grow up to three feet long.  The males seldom exceed one and a half feet.  They spend their energy attempting to mate instead.  Adults are shaded with olive, brown and yellow coloring that match the pigment of the lake or river floor.  Some are varicolored.  Some are not.  Physical changes permeate through their bodies when migrating from the ocean water and between the phases of life.

The eels live in solitude and communicate little.  They do not form schools.  Environmental conditions can bring them together.  They are opportunistic hunters and eat whatever comes their way.  Fish, crustaceans and other creatures are potential nutrition.  Certain species consume aquatic eggs and are important in the population control of their ecosystem.  Some burrow into the sediment to forage for prey.  Others dig to hide from piscivorous birds and sizable fish.

A lateral line runs down the trunk and provides sensory awareness through water movement.  The cells in their nasal sac are able to sense diluted chemicals three to four molecules small.  The characteristic is vital during nocturnal travel and migration.  The saline levels and water temperature are used to gauge direction.  Eels have geomagnetic awareness.

Freshwater eels trek to the ocean to breed.  The journey can take a year to complete.  Temperate migrations last between to six and ten months.  Tropical voyages last around three to five.  European eels travel close to four thousand miles in a single migration circuit.  Some eels have flexible migration loops and may not return to fresh water.

Life begins inside an egg in the ocean.  It hatches and the leptocephali larval stage begins.  The larvae feed on small organic detritus called marine snow.  They metamorphose and grow into glass eels.  The translucent fish flow into estuaries.  They leave the brackish water and head upstream.

Pigmentation begins in the elver eel stages.  Time passes and they become yellow eels.  Their stomach is yellow.  They grow and it turns silver.  The silver eel stage is the last before adulthood.  The grownups turn back to the ocean and restart the cycle.  It is hard work.  Freshwater eels never complain.  There is no time to be fresh.