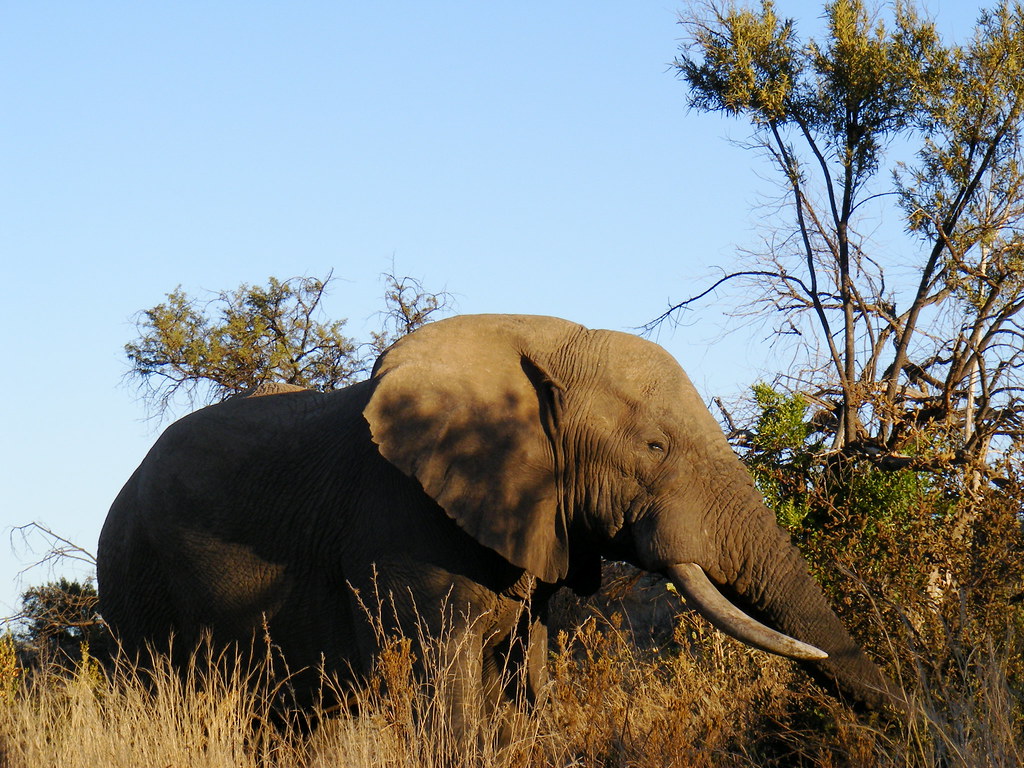 The Elephant is the biggest living land animal.  Elevators are out of the question.  They belong to the Elephantidae family and are the surviving members of the Proboscidea order.  There were once several hundred species, such as mastodons, that roamed the Earth.  The majority have gone extinct and only three species remain today (African bush, African forest and Asian elephant).  The word elephant is derived from the Latin word elephas.  The Middle English equivalent is olyfaunt and the Old French used oliphant.

There are around three hundred fifty bones in the elephant’s skeletal structure.  The spine is linked with a series of tight joints that limit flexibility.  Asian elephants have twenty pairs of ribs.  African ones have twenty-one.  Male African bush elephants are between ten to eleven feet tall.  They are the tallest.  Females reach up to nine feet.  Asian male elephants are a little over nine feet from the ground and the females reach up to eight.  The smallest species are the African forest elephants.  The males average around seven feet in height .

The skull of an elephant is built to withstand head on collisions and tusk to tusk combat.  The back of their skull is wide and designed to protect the brain in every direction.  Open skull cavities provide strength and reduce weight.  The naked bone looks like a honeycomb.  They have stout necks that lend support to their giant skull.  They have a limited field of vision due to the placement of their eyes.

The ears are wide and come to a thin point.  The flaps have several capillaries (blood vessels).  The blood flow helps regulate body heat in the torrid climate.  An elephant can flap their ears to accelerate the process.  The African bush elephants face the highest temperatures and in turn, have the biggest ears.  The scope of the ear allows them to hear low frequency sounds.  Safari patrons need to be aware that hushed elephant jokes may be heard.  Elephants have a wonderful sense of humor, as long as the comedy is tasteful and not related to their ears.

An elephant’s most important characteristic is their trunk.  It is a combination of their upper lip and nose.  There are no bones and minimal fat.  One hundred and fifty thousand bundles of muscle fibers (muscle fascicle) create the structure.  The trunk has many purposes.  It allows them to breath, smell, grasp, touch and talk.  Their sense of smell is extreme and four times more powerful than a bloodhound’s.

The trunk can be used to fight other elephants.  Never bring a sword to a trunk fight.  It is strong and can lift close to eight hundred pounds.  The trunk is dexterous enough to clean their eye and crack open a peanut without harming the seed.  They can reach up to twenty-three feet high and use them to drink water.  Around two gallons can be stored inside.  Sometimes they spray grass and water on their body to shield themselves from the elements.  When they dive underwater, trunks are used to breath on the surface.

Elephants have durable skin that is one inch thick.  It is grey in color.  Young ones have brown and red hair that fades and darkens over time.  The Asian elephant has more hair than the African one.  Their skin is dense, but sensitive.  Mud is used as a natural protection from ultraviolet light.  It protects from dehydration and insects too.

There are twenty-six teeth in an elephant’s mouth.  Twelve on the top and bottom and two tusks.  They are polyphyodonts and continually replace their teeth.  They cycle about six times throughout their lifetime.  New ones grow in the back and slowly push the old ones out.  The first changeout happens when they are two to three years old.  The next set rolls in by their sixth birthday.  The third leaves sometime in their teens.  When an elephant is in their late twenties, their fourth cycle moves out.  The fifth vacates when they turn forty and they are left with their sixth set of teeth until death.

Asian elephants live in arid thorn-scrub woods and evergreen forests.  African bush elephants are found in deserts, marshes and savannas.  The African forest elephant prefers the…forest.  All of the species are herbivorous and live near water sources.  Their diet consists of grass, roots, fruit, twigs, bark and leaves.  Over three hundred pounds of food and ten gallons of water are consumed every day.  They eat in the morning, night and afternoon.  They snooze at noon.  They average about three to four hours of shut-eye a day.

Elephants are a keystone species and transform their environment.  They create waterholes and excavate caves that are used by other animals.  Seed dispersion happens as they travel throughout the landscape and their dung is used by monkeys and beetles.  Sometimes their impact is negative and they can cause erosion and the destruction of other species habitats.

Elephants are intelligent and self-aware.  They can recognize themselves in a mirror.  An elephant can fashion tools from their environment, such as using a branch as a flyswatter.  Their memory is advanced and they can memorize a large-scale area and the location of their family members.  Studies of captive elephants revealed that they can distinguish between various audio and visual discrimination pairs.  They retained parts of what they learned when re-tested.  Some display emotional traits and appear to mourn their dead.  As the idiom goes, an elephant never forgets.