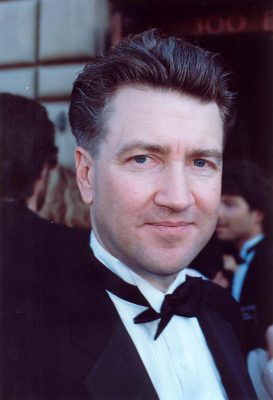 David Lynch is an American surrealist artist, writer and director.  He was born on January 20, 1946 in Missoula, Montana.  His mother was Edwina Lynch and a tutor.  Papa Lynch was named Donald and a research scientist.  The Lynch family moved around a lot and settled in Alexandria, Virginia.  David attended high school in Alexandria and was an Eagle Scout.  He studied at the School of the Museum of Fine Arts in Boston in 1964.  David Lynch was not inspired and left after a year.

Lynch toured Europe with the hopes of perusing his career in painting, but returned after a few weeks.  He enrolled at the Pennsylvania Academy of Fine Arts.  The school was a better fit and he met Peggy Reavey.  They married in 1967 and purchased a home in the poverty-stricken Fairmount neighborhood (Philadelphia).  The ethos of Fairmount was pivotal to his artistic development and helped shaped his career.

David’s first short film was titled Six Men Getting Sick (Six Times) (1967).  It was shot on a 16mm camera and won first prize at the Pennsylvania Academy’s year end exhibit.  Peggy starred in his next short in 1968.  It was called The Alphabet.  The film was experimental and led him to peruse a grant from the American Film Institute.  Lynch submitted The Alphabet and a script of his next short.  His request was accepted and The Grandmother (1970) was made.  The cast consisted of his friends and was filmed in his home in Fairmount.

The Lynch family moved to Los Angeles in 1971.  David studied at the AFI Conservatory in the Hollywood Hills.  He went right to work on his next script.  The project was called Gardenbeck and based on one of his paintings.  The feedback was positive, but overwhelming.  He ended up quitting at the start of his second year.  The dean of the school reached out and told him that if he returned, he could create without any interference.  David Lynch agreed and started on what would become Eraserhead.

The script was twenty-one pages long and Lynch began filming at night.  He burned through the ten-thousand-dollar grant from AFI and completed Eraserhead with a loan from his father.  The film was finished in 1976.  The process was intense and David and Peggy divorced after the production ended.  Lynch married his friend’s sister Marry Fisk in 1977.  Eraserhead was shot in black and white and misunderstood by the critics.  David submitted the film to the Cannes Film Festival.  The reception was mixed and it was not selected for screening.  The New York Film Festival rejected it as well.  The Los Angeles Film Festival did not and it was distributed to a wider audience.

Earserhead gained popularity on the underground film circuit.  The reviews were split, but Stanley Kubrick cited it as one of his favorite films.  Mel Brooks’s executive producer Stuart Cornfeld was influenced by the movie and agreed to help Lynch on his next project.  David ended up abandoning it and asked Cornfeld to find him a script instead.  Stuart selected four and Lynch chose The Elephant Man.  It was penned by Eric Bergren and Chris de Vore and based on the life of Joseph Merrick.

The Elephant Man was released in 1980 and starred John Hurt and Anthony Hopkins.  It was a massive success and was nominated for eight Academy Awards (Best Actor, Best Picture, Best Art Direction, Best Costume Design, Best Film Editing, Best Original Score, Best Adapted Screenplay and Best Director).  The floodgates opened and offers poured in.  George Lucas reached out and gave Lynch the option to direct Return of the Jedi.  He declined and argued that Lucas’s vision would be better.  Dino de Laurentiis proposed an adaptation of Frank Herbert’s novel Dune (1965).  David Lynch agreed.

Dune came to theaters in 1984 and was a commercial failure.  It grossed about twenty-seven million against its forty-five-million-dollar budget.  The sequel was scrapped and Lynch turned to his next project.  Blue Velvet premiered in 1986 and casted Dennis Hopper and Laura Dern.  The movie earned Lynch a second Oscar nomination for Best Director and planted him in the mainstream spotlight.  The talented artist pivoted and went to work on a television show with Mark Frost (Hill Street Blues).

The collaboration spawned Twin Peaks.  The show was initially titled Northwest Passage and ran from 1990 to 1991.  The plot followed a supernatural FBI investigation led by Special Agent Dale Cooper (Kyle MacLachlan).  The ratings were high and it ran for two seasons before ABC interfered with David’s vision.  It ended on a cliff hanger and mutated into a cult classic.  David was not discouraged and began working on his adaptation of Barry Gifford’s book Wild at Heart: The Story of Sailor and Lula.

The result was Wild at Heart (1990) and starred Laura Dern as Lula and Nicolas Cage as Sailor.  The surreal and violent film won Lynch the Palme d’Or at the Cannes Film Festival (1990).  He didn’t rest on his accolades and released the prequel / sequel film adaptation of Twin Peaks in 1992.  The movie was titled Twin Peaks: Fire Walk with Me and it was a domestic failure.  It performed well overseas in Japan.

Patricia Arquette and Bill Pullman were the main protagonists in Lynch’s subsequent film, Lost Highway (1997).  It failed to turn a profit and the reviews were average.  Lynch filmed a pilot for ABC that morphed into a film called Mulholland Drive (2001).  The atypical Hollywood story followed Justin Theroux, Laura Harring and Naomi Watts.  The outcome was a Best Director win for David at the 2001 Cannes Film Festival.  The Academy Awards nominated him for Best Director a third time.

Inland Empire, his longest picture, dropped in 2006 and had a runtime of three hours.  The actors included Harry Dean Stanton, Laura Dern and Justin Theroux.  Twin Peaks returned for a third season in 2017.  It was well received.  David Lynch is working on a new show today.

“We think we understand the rules when we become adults but what we really experience is a narrowing of the imagination.”